Meerkat trio take a trip to the vet for health check 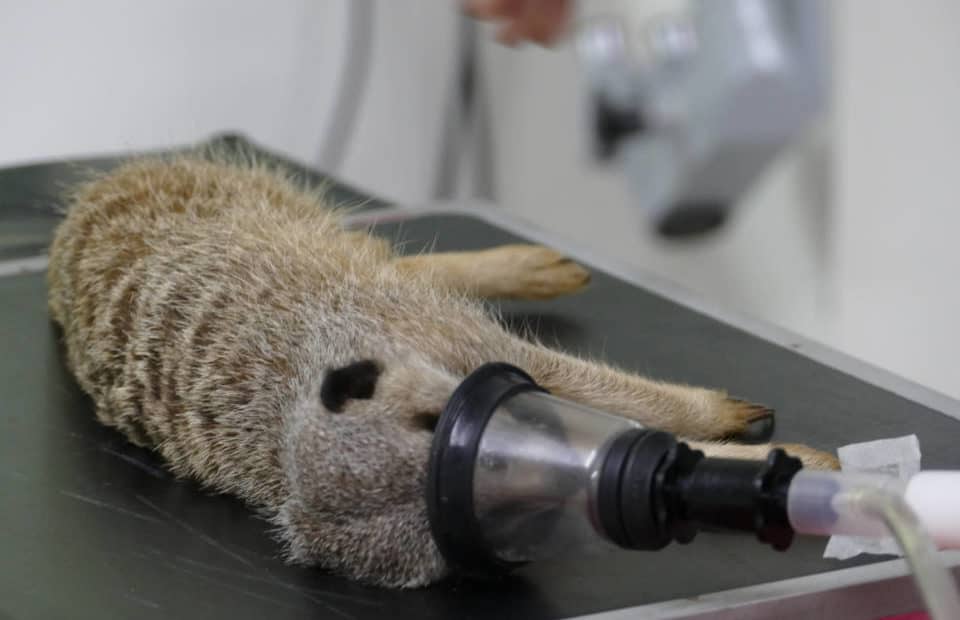 Meerkat trio take a trip to the vet for health check

At one point a group of keen wanna-be vets from a local school watched through the Animal Health Centre window, as the first meerkat was brought out of its box.

Regular health checks play an important part in monitoring the zoo’s animals with blood tests and x-rays allowing vets to identify any potential problems in animals that otherwise appear healthy.

First on the table today was nine-year-old Snow White, so called because of her white fur which dramatically changed from brown a few years ago. Snow White, the matriarch of the mob, baffled the vet team when her fur changed colour. However, despite the surprise of her losing her pigmentation, the only other problem vets could determine from her change was that she might need more protection from the sun.

Senior vet Ian Smith said “Snow White is in good condition and weighs 1.082kg. The only thing we’ve changed since she turned white is that we’ve moved her to a shadier habitat as her light colouring makes her more susceptible to sun damage.

The vet team assessed the animals by nose tail examination with vet Oliver Funnell explaining that he was specifically checking the animals’ joints as they were ageing and these regular health checks are very important to screen for any other health problems.

Bashful, a near-geriatric 10-year-old and weighing 1.157kg was the second meerkat on the operating table. Despite his age, his overall body condition was good with vet Oliver Funnell saying, “Bashful is in good shape for a meerkat of his age and on the xrays his joints look fine.”

“Bashful has his full complement of teeth and looks in great shape,” he added before giving him a nail trim.

Last up was Sneezy who at nine-and-a-half years old was the heaviest of the three, weighing in at 1.71kg.

Oliver found Sneezy to be in the best condition of the three. “Sneezy is looking really good,” said Oliver. “He is in very good health and x-rays show no issues. I’m really happy with him,”  he finished.

All three meerkats were returned to the rest of the mob by keeper Arliah.

Meerkats are fully grown from six-months of age and enjoy a diet of grasses, leaves, fruit, roots. insects, small rodents, reptiles and eggs.

Just like the seven dwarves, meerkats are very much team players. When the mob are foraging for food one of them will stand on guard looking out for danger, emitting a squeak if there’s a predator or danger nearby. This sentry behavior is often spotted by visitors to Adelaide Zoo.

Meerkats are a favourite animal with the zoo’s visitors and are regular point of interest for the zoo’s many educational visits. Uniquely, meerkats are one of the only animals to be seen actively teaching their young how to survive.

Meerkats are native to southern Africa and can be found in the Kalahari Desert. They can survive in very harsh conditions and climate, with little water, limited food and many predators.