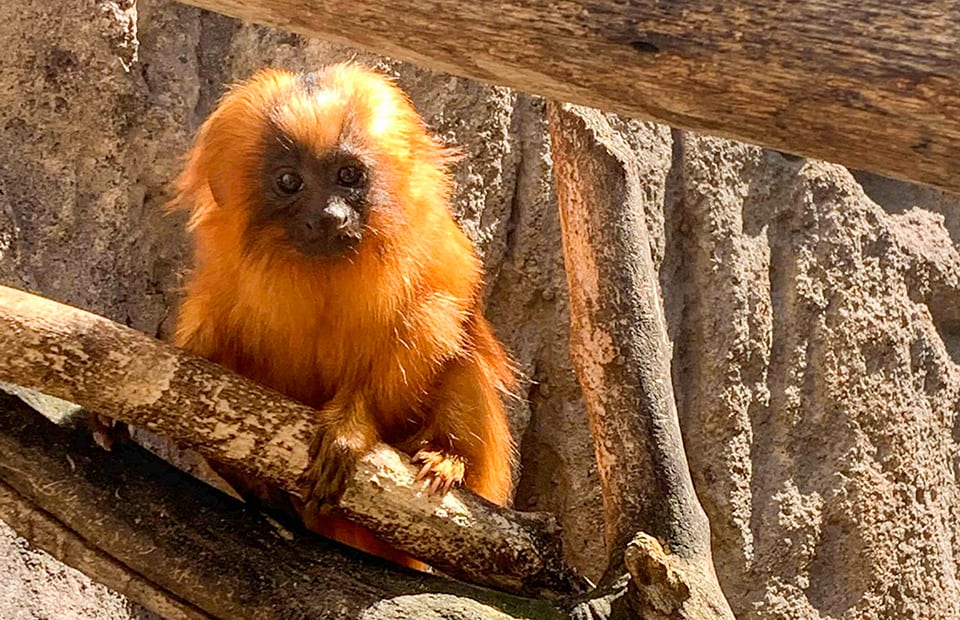 Have you spotted the newest ball of fluff to join the Golden Lion-tamarin troop yet?

Welcomed to experienced parents Roscoe and Arella in September, the young tamarin cutie has been busy exploring the tamarin tunnels with the rest of the family.

While the little one spent a few weeks clinging tightly to Mum and Dad, it can now be seen following in the pint-sized footsteps of the troop.

Tamarins are very social animals so the rest of the group will help to care for and raise the tiny youngster.

Even though the bub is yet to be named or sexed, it’s definitely been keeping our keepers on their toes and delighting them with its playful antics.

This new arrival joins its parents, two older siblings, Frida and Deigo, its aunties, Alondra and Raquel, uncle Rodrigo and grandmother Aurora in the Tamarin House and Tamarins on the Run tunnel exhibit near the Rotunda at Adelaide Zoo.

Dad Roscoe arrived at Adelaide Zoo in 2017 after making the move from Mogo Zoo in New South Wales while Arella, the little one’s mum, was born at here in 2014 to the troop’s oldest female, Aurora.

Getting their name from their gorgeous red-orange colour and long mane-like hair around their face, Golden Lion-tamarins are classified as an endangered species with less than 3,700 individuals left in the wild, based on a 2017 estimate.

It’s believed the species has lost between 95 and 98% of its original home range and can now only be found in small pockets of rainforest in Brazil.

Thankfully, the last 40 years have seen a rise in Golden Lion-tamarin numbers in the wild, thanks to an emergency conservation plan which saw just 200 wild individuals in 1982 increase into today’s remaining population.

However, in 2017 an outbreak of Yellow Fever in Brazil effectively saw one in every three Golden Lion-tamarins lost.

While a Yellow Fever vaccine exists for humans, scientists and conservation groups are working tirelessly to find a safe vaccine for Golden Lion-tamarins before it’s too late.

In the meantime, a conservation plan is being implemented which involves planting trees to ensure more habitat is available to the remaining tamarins and engaging local communities and people around the world to support the conservation of this tiny primate.

As a conservation charity that exists to save species from extinction, we’re doing everything we can to make sure incredible animals like the Golden Lion-tamarin are living safely into the future.