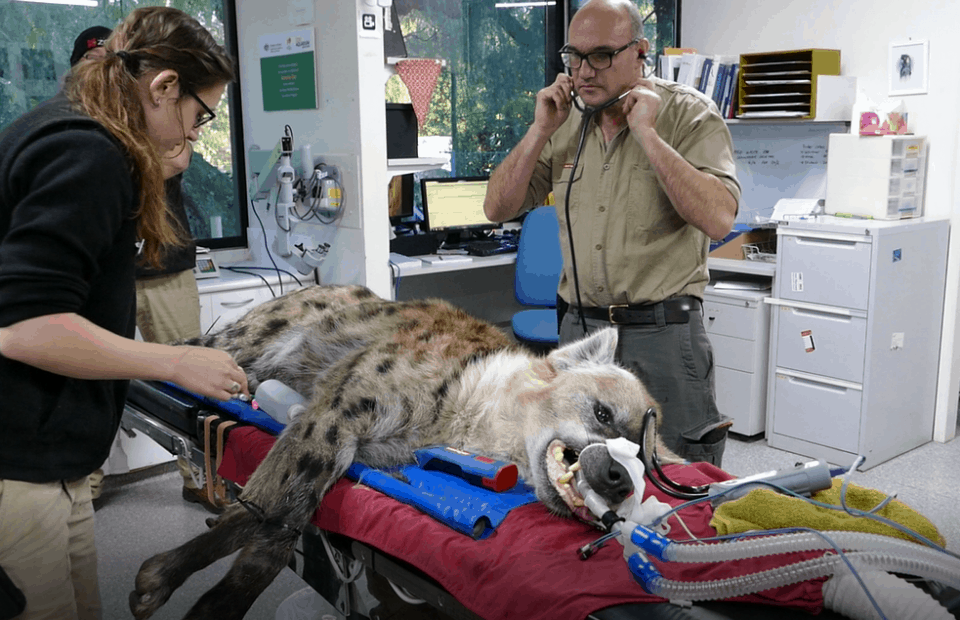 Adelaide Zoo’s two Spotted Hyaenas Gamba and Mkoko have had a visit with the vet!

The father and son duo both had a general anesthetic while they were given a full-body examination.

Both hyaenas underwent thorough health checks with a complete physical examination, comprehensive blood tests and X-rays of the chest, abdomen, bones and joints.

Zoos South Australia Veterinarian Oliver Funnell said the checks had been very helpful in determining the health of 15-year-old Gamba and 3-year-old Mkoko.

“All animals at Zoos SA undergo periodic health checks and as expected, the much younger Mkoko was found to be in good health,” Oliver said.

“As an older hyaena, Gamba was found to be remarkably healthy for his age, but there were some changes in his spine and some minor damage to two teeth.

“It’s important that we screen these older animals for any issues that can be common with older age, they are potentially more manageable if diagnosed early enough.”

Hyaenas are often quite misunderstood and stigmatized in the media as being vicious and stupid.

But, research has proven hyaenas to be very intelligent and excellent problem-solvers. At times they can even outperform great apes with problem-solving tests.

As a conservation charity that exists to save species from extinction, animal conservation is at the forefront of all we do.

At Adelaide Zoo, Gamba and Mkoko act as ambassadors for their species and help educate Australians about the plight of their wild cousins.

Found in most African habitats, the Spotted Hyaena has an estimated global population of between 27,000 and 47,000.

These mighty carnivores live and adapt to a variety of habitats from open grasslands, dry semi-desert, forest areas and the acacia bush.