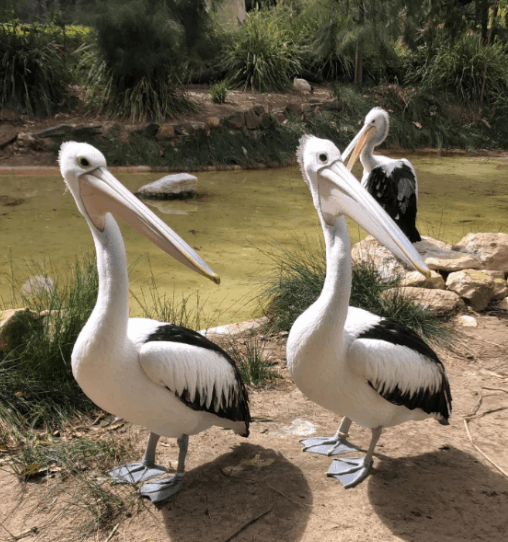 It’s time to let the cat out of the bag – there are two movie stars living at Adelaide Zoo!

We are excited to announce Adelaide Zoo pelicans Salty and Skye have featured in the 2019 new Australian film Storm Boy.

Salty and Skye arrived at their new home at Adelaide Zoo after they finished filming in September last year. The pair have since been living incognito with the rest of our beautiful pelican flock.

Adelaide Zoo’s dedicated keeping and veterinary team also lent a helping hand during the filming of Storm Boy, having hand-raised the group of young chicks who featured in the story.

Movie-goers will soon get a glimpse into what it’s really like to hand raise a pelican when Storm Boy hits the big screen in January 2019.

“Raising these beautiful birds took a lot of work and many, many hours between our team, but it has been a privilege to see them grow up and develop their own individual personalities,” Amelia said.

“And now we’re all very pleased to have welcomed Salty and Skye, they are thriving here at Adelaide Zoo with the rest of the flock.

“As pelicans, they love their feeding time and can be quite boisterous and funny, so I’m really looking forward to seeing that cheekiness come alive on the big screen.

“I think they’ll have quite a few fans coming to visit them once Storm Boy is released.”

Storm Boy follows the story of Michael Kingley, a successful retired businessman and grandfather. When Kingley starts to see images from his past he can’t explain, he is forced to remember his long-forgotten childhood growing up on an isolated coastline with his father.

He recounts to his grand-daughter the story of how he rescued and raised an extraordinary orphaned pelican, Mr Percival.

Their remarkable adventures and special bond has a profound effect on all their lives.

Based on the beloved book, Storm Boy is a timeless story of an unusual and unconditional friendship.

Adelaide Zoo was previously the proud home to the original Mr Percival, who starred in the 1976 Storm Boy. Mr Percival arrived at Adelaide Zoo in 1988 where he was a true crowd favourite before he passed away at 33-years-old in 2009.

Adelaide Zoo visitors are invited to come and say hello to Salty and Skye and celebrate the release of the movie. Storm Boy is in cinemas on 17 January, 2019.