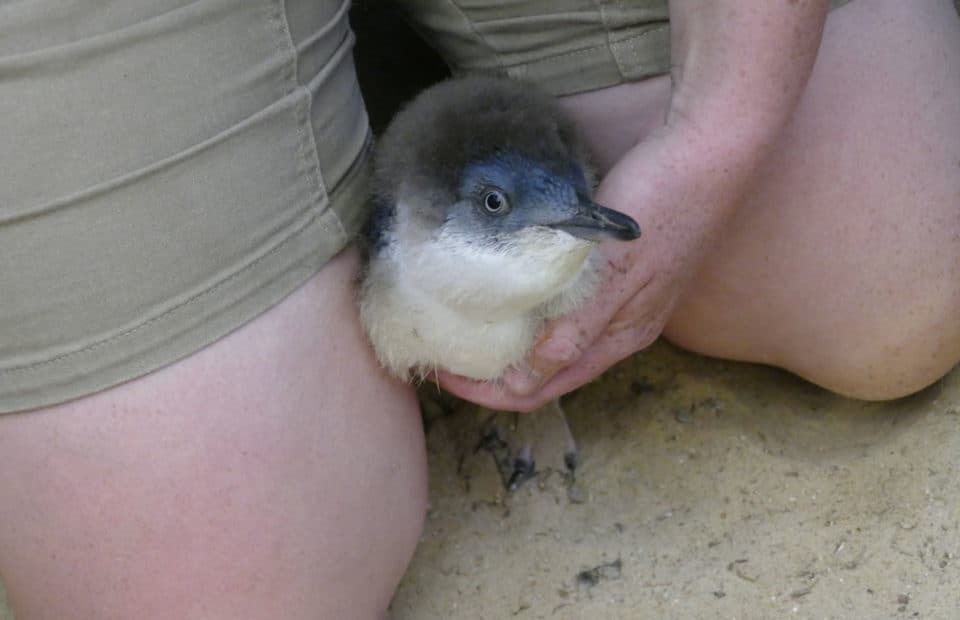 Penguin breeding isn’t always black and white. Sometimes there is a grey area – and in this case, it came in the form of the fluffy grey down of a new Little Penguin chick.

The eight-week-old chick hatched from the egg of wild-rescue penguin Sticky Beak and five-year-old Brioche at Adelaide Zoo’s Penguin Bay.

The new couple were learning to nest, however after a number of attempts, they were not sitting on the egg long enough for it to survive.

Keeper, Amelia Kennett, said the breeding of Sticky Beak and Brioche was significant as their genetics were very valuable to the colony, so the keepers had an idea to introduce a surrogate couple.

“We have a few pairs of penguins who unfortunately are either too closely related or overrepresented and therefore unable to breed,” she said.

“Their eggs are usually swapped with dummy eggs. At the time of this chick being laid by Sticky Beak and Brioche another pair, Daquiri and Tux, were just starting the month-long cycle of sitting on dummy eggs.

“We decided to swap the egg from Sticky Beak and Brioche out and popped it under Tux and Daquiri, which has resulted in our lovely chick.”

10-year-old Daquiri and five-year-old Tux were very attentive to the egg and a healthy fluffy chick hatched bringing the colony numbers to 21.

Yet to be named or sexed, the chick has been feeding well and will venture out into the pool once it has lost all of its down feathers, making it waterproof.

In a few weeks’ time, part of the Little Penguin colony will be on the move and waddle their way into a new home, a brand  new exhibit near the front entrance of the Zoo. These birds will be the core of the sustainability breeding program at Adelaide Zoo.

The soon-to-be-opened exhibit will be focal point upon entry to the zoo and features a jetty, sandy beach and recycled timber feature wall.

Little Penguins, also known as ‘fairy penguins’, are found in the coastal waters of Australia and New Zealand and their colonies can range in number from just a couple of pairs to thousands.

They are the smallest species of penguin in the world, growing to about 30cm in height – just a quarter of the size of their largest cousins, the Emperor Penguin.

Although penguins can’t fly, their wings have evolved into powerful flippers, making them the most efficient swimmers of all bird species.

While wild Little Penguin populations are currently stable, they are under pressure from pollution in the ocean such as fishing hooks, plastic waste and oil spills, as well as over fishing and habitat loss.

You can support Little Penguins in the wild by taking part in a ‘Penguins In Person’ experience at Adelaide Zoo!

Not only will you learn more about these feathery fish-loving fellows, but as a not-for-profit organisation, the money you spend will go back into conservation projects and protecting their species in the wild.

Find out more or book a ‘Penguins In Person’ experience at www.adelaidezoo.com.au/animal-experiences/.