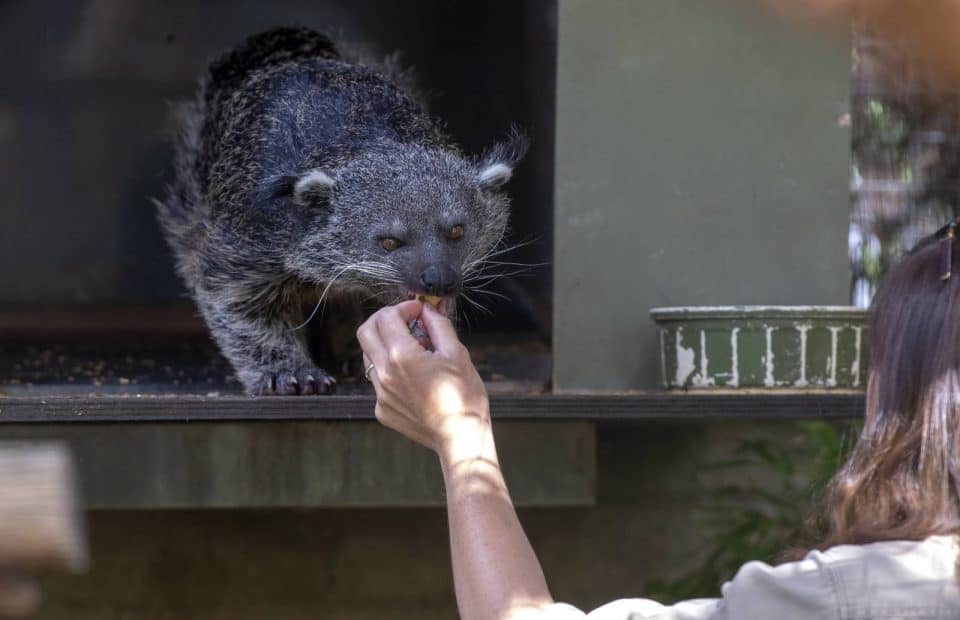 If you get a whiff of freshly buttered popcorn at Adelaide Zoo, you’ve got our newest resident Jakarta to thank!

Adelaide Zoo is pleased to welcome beautiful binturong Jakarta to the wild family.

Born at Perth Zoo, the one-year-old boy arrived at his new home late last year and has been spending time getting to know his keepers and new surroundings.

This fascinating mammal has the face of a cat and body of a bear, giving rise to the commonly-used nickname ‘bearcat’.

Adelaide Zoo Keeper Arliah Hayward said while Jakarta can be on the shy side, he’s settled in well to his new habitat.

“Being a young binturong, Jakarta took some time getting used to his new surroundings but we are happy with how he’s adjusted,” Arliah said.

“Visitors might notice he emits a buttery popcorn smell which marks territory for other binturongs in the wild but also helps potential partners find each other during breeding season.

“Binturongs are nocturnal animals and keep quiet during the middle of the day, but Jakarta will come out of his nest box in the mornings and late afternoons – especially if a keeper is there with some fruit for him!”

The species is classified as a carnivore, however their diet mainly consists of fruit.

In the wild, binturongs once lived throughout China, India, Thailand, Cambodia, Malaysia, Indonesia, the Phillipins and on the island of Borneo, but now can only be found in pockets throughout South East Asia.

Sadly, binturongs are at risk from habitat destruction, poaching for traditional medicines and the fur trade.

In some areas, they are considered a delicacy and hunted for food. It’s estimated the population has declined by 30 per cent in the last 30 years.

As a conservation charity existing to save species from extinction, Zoos South Australia is proud to be home to beautiful ambassador binturong Jakarta, where he helps to educate visitors about his remarkable species and wild cousins.