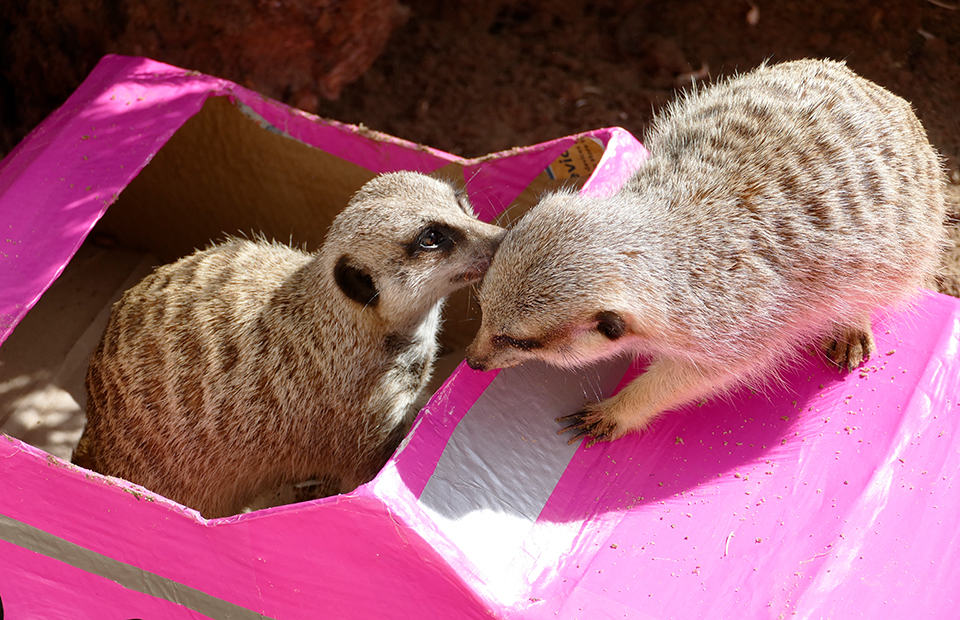 The little ones were treated to colourful cars and papier-maché balls filled with one of their favourite treats – kibble.

“They’re very busy and often keep us on our toes.

“We have to make sure our enrichment isn’t too tall because they will climb up and use it as a possible launching pad to an area outside their exhibit!”

Apart from being highly active and seriously cute, meerkats are interesting for a range of other reasons. 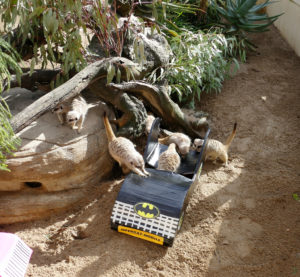 For example, if you exclude human beings, meerkats have the most complex vocabulary of all mammals on earth, with a hugely diverse range of sounds used to communicate.

And while their name might suggest being part of the cat family, meerkats are actually a type of mongoose.

Adelaide Zoo is home to 25 meerkats across four different exhibits.

Visitors will be very familiar with the nine-strong mob out the front of the Giraffe House, or with Snow White, our white female meerkat, who lives in one of the three groups opposite our Australian Sea Lions.

Meerkats live in large family groups led by a single breeding pair. Sometimes multiple breeding groups will come together to form a larger mob, but breeding will always be kept between the original pairs.

Inhabiting dry regions of short grass and sparse woody scrub in southern Africa, these small mammals work as a team to protect the family from predators, taking turns acting as sentries who watch over the group and alert them to potential danger.

Meerkats also have the unique ability to close their ears to keep dirt out while they burrow.

Additionally, their stomach acts as a sort of solar panel during the winter months.

Under a thin layer of stomach hair is a patch of dark skin which collects heat from the winter sun in order to provide warmth on cool days.

The dark band around their eyes also reduces any glare from the sun.

Thankfully, meerkats are not a threatened species and are present in several large and well-protected regions across southern Africa.

Visitors can get a glimpse of Adelaide Zoo’s meerkat mobs every day from 9:30am to 5pm.