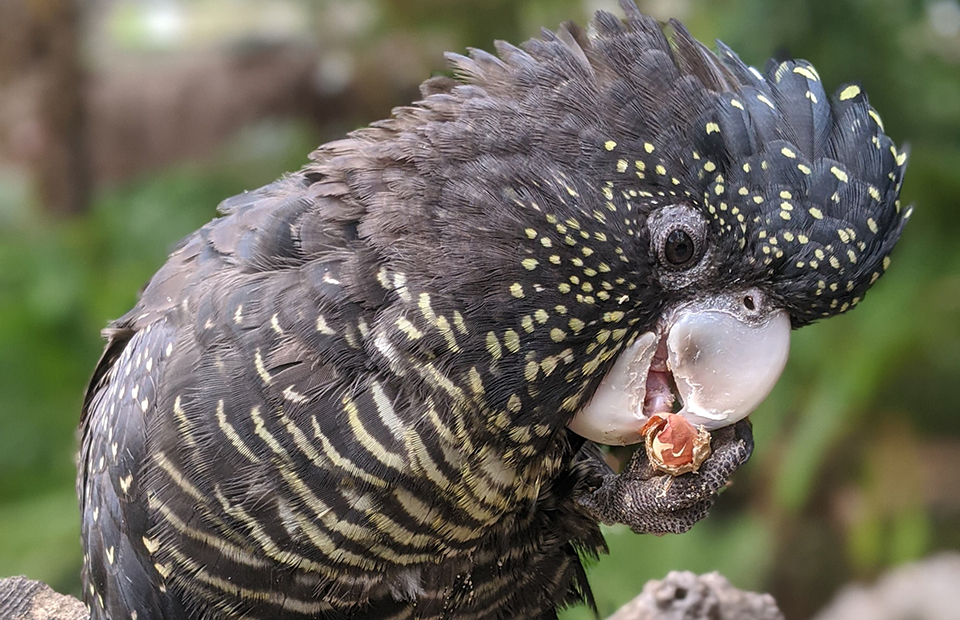 Young Spence was found by landholders in the south-east of South Australia on the ground with a very severely injured wing.

The landholders, whose property was located in the Hundred of Spence near Naracoorte, giving the bird her name, contacted a member of Birdlife Australia, one of Zoos SA’s conservation partners for the Cockies Helping Cockies project, who assessed her and helped deliver the special bird to Adelaide Zoo.

Conservation Manager Dr Liberty Olds collected Spence and drove her to Adelaide Zoo where vets took x-rays and determined she had both broken and dislocated her right wing which, while it could be treated, would have left her with life-long arthritis pain.

Knowing that Spence was very comfortable around people and that, as a young bird, she hadn’t learned to fly yet, vets made the decision to amputate her wing.

After recovering in the Animal Health Centre under the watchful eye of our dedicated vet nurses and keepers, little Spence made the journey to our Free Flight area where she received plenty of love and attention from keepers as well as the companionship of fellow red-tailed black cockatoo Banks.

Keeper and presenter Erin Turrell says Spence settled in brilliantly, even lending a hand (or wing) in the design of her exhibit.

“Obviously having lost her wing, Spence had a slightly different way of getting around to other birds, which included using her beak and feet a lot more,” says Erin.

“We placed a number of perches and feeders around the exhibit and let Spence show us which ones she preferred and what she was comfortable using.

“Many of our regular visitors will know our male Banks and we’re pleased to say that the two cockatoos, after some initial ignoring of each other, have become friends and can regularly be found hanging out on the same perch.”

Spence has quickly captured the hearts of keepers and visitors alike, with her tough start to life providing keepers with a teaching moment about the vital Cockies Helping Cockies project.

“She’s so funny to work with. She’s very fussy and will only eat peanuts with their shells still on,” says Erin.

“This is probably a nod back to the natural behavior of her species, where cockatoos spend a lot of their time breaking open seed pods and chewing everything around them – she loves destroying things!”

Spence’s arrival at Adelaide Zoo coincides with the allocation of more funding to save her species in the wild.

Feeding only on native Stringybark and Buloke trees, these birds are struggling to find food after over 62 per cent of their native habitat has been cleared, mostly for agricultural purposes.

Sadly, there are less than 1,500 South-eastern Red-tailed Black Cockatoos estimated to be left in the wild.

Along with Trees For Life SA and BirdLife Australia, and thanks to funding from Limestone Coast Landscape Board through the Federal Government-funded National Landcare Program, Zoos SA now has more vital funding available via the new Communities Helping Cockies partnership.

Zoos South Australia and Trees For Life SA are on the lookout for landholders between Keith and Mt Gambier with sandy or clay/loam soil on their properties to help us plant stringybark or buloke trees to provide much-needed food for these birds.

If you or anyone you know could help us with this vital project, please get in contact with our Cockies Helping Cockies project officer Kerry Gilkes on 0429 660 027.

As a conservation charity that exists to save species like the South-eastern Red-tailed Black Cockatoo from extinction, we’re so proud to be a part of conservation programs that directly impact the future of this incredible bird.