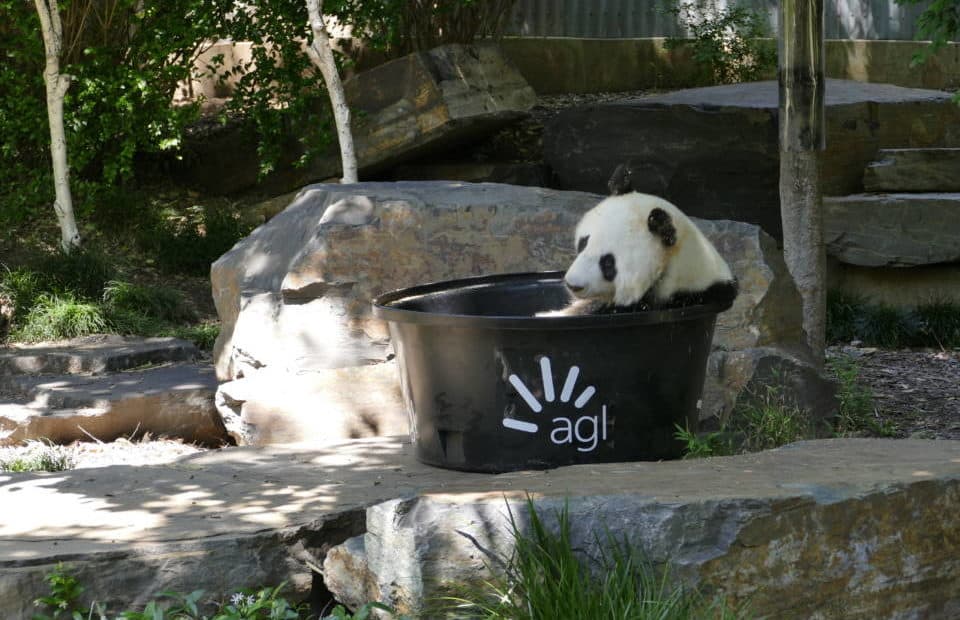 It’s the beary good news the whole of Australia has been waiting for. The agreement between Adelaide Zoo and the China Wildlife Conservation Association has been signed, thereby extending the loan of Giant Pandas Wang Wang and Fu Ni for five more years.

The two Giant Pandas will now stay at Adelaide Zoo until late 2024, delighting visitors and helping conservationists to learn more about this vulnerable species. And we’ve planned heaps of pawesome ways the public can celebrate this news with us!

Speaking about the signing of the agreement, Zoos SA Chief Executive, Elaine Bensted said: “We are absolutely thrilled to announce that Wang Wang and Fu Ni will stay at Adelaide Zoo until late 2024. “We were always positive that the deal would go through but having the signatures on the agreement is very satisfying indeed.

“The Giant Pandas are a huge draw card, helping people to connect with nature and learn about this incredibly special species.

“From young to old, everyone who visits our Bamboo Forest falls in love with Wang Wang and Fu Ni. They are always a delight to watch, whether they’re exploring their habitat, laying in the sun, climbing trees, or eating bamboo.

“However, we know the benefits of visiting Adelaide Zoo and seeing the Giant Pandas goes way beyond this. There are the flow-on benefits to the economy and there are a range of benefits from an education perspective.

“School children are inspired by seeing Wang Wang and Fu Ni and learning about their plight in the wild. This kind of interaction is crucial to educating and inspiring the next generation of scientists, conservationists and animal lovers to help save pandas and other species from extinction,” said Elaine.

Under the new deal, Adelaide Zoo will receive funding from the South Australian Government to support its commitment to Giant Panda conservation. This money goes directly towards Giant Panda research and breeding programs in China in exchange for the opportunity to have Wang Wang and Fu Ni in Adelaide.

We’re also very thankful for the support we have received from a number of corporate partners as part of housing the Giant Pandas – AGL, Repromed, SA Water. “We’re really pleased with the agreement and we look forward to continuing to bring people from all over the country to see Wang Wang and Fu Ni over the next five years,” Elaine said.

To celebrate the five-year extension and to encourage people to come and see Wang Wang and Fu Ni, ticket prices to Adelaide Zoo will be slashed to $5 for children up to 15-years-old and members can also bring a guest for $5 from 25 – 30 November 2019.

“From tomorrow until the end of November, kids can visit us for $5 and members can bring a friend for $5. We encourage everyone to join us this week to celebrate Wang Wang and Fu Ni’s five-year extension,” Elaine said.

“Rather than ‘Black Friday’, we’re also gearing up to release a ‘Black and White Friday’ sale on Friday 29 November with amazing discounts on animal experiences, membership and retail items both online and in store.”

Director of Life Sciences at Adelaide Zoo, Dr Phil Ainsley, was happy to announce the deal was complete and said it was pleasing that the Giant Panda’s conservation status had improved during the past decade, from critical to vulnerable, indicating funding from zoos around the world was working.

“In 2016, the IUCN World Conservation Congress down-listed the Giant Panda to ‘vulnerable’. It’s very rare to see an animal improving in conservation status and Adelaide Zoo is incredibly proud to have played a global role in achieving that,” said Phil.

“We are incredibly grateful to China for sharing the pandas with us; it has offered the unique opportunity to contribute to global panda research.

“We look forward to continuing to help Giant Panda conservation and gain a better understanding of pandas living in the Southern Hemisphere.”

While the agreement was being drawn, it was decided not to breed the pandas this year. Instead researchers collected urine samples from female panda Fu Ni both pre and post-ovulation. These samples gave the zoo valuable baseline data and greater insight into what impact being in the Southern Hemisphere may have on the pair’s ability to reproduce.

This research will help provide valuable information to our team of experts and the global Giant Panda conservation efforts, allowing us to make better informed choices for future breeding attempts.

The data collected from research this year will assist with future breeding attempts.

Wang Wang and Fu Ni arrived in Adelaide on a 10-year loan from the China Wildlife Conservation Association in 2009.