Keepers double down to save Orange-bellied Parrots 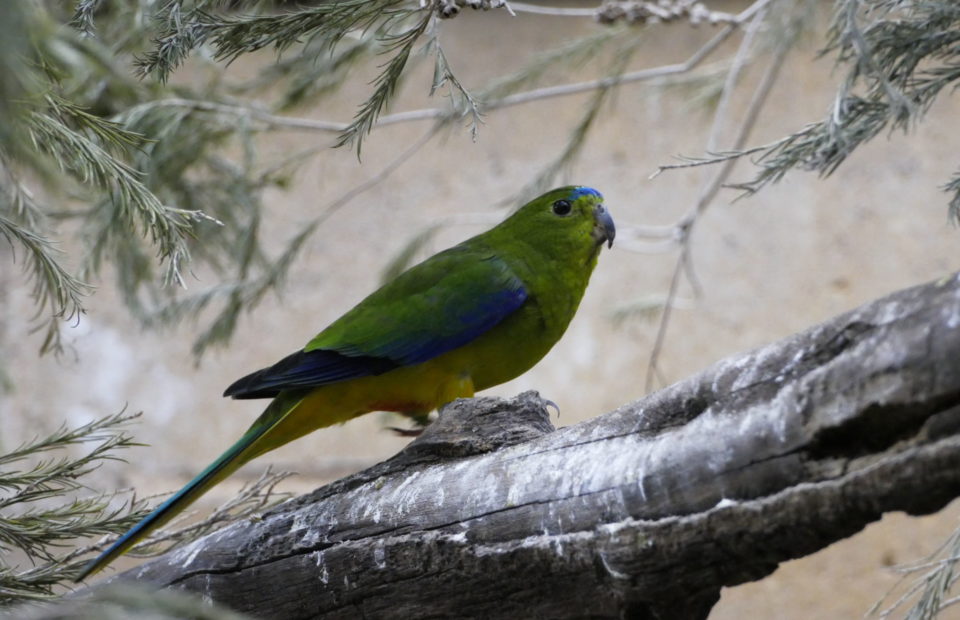 Keepers double down to save Orange-bellied Parrots

Orange-bellied Parrots: A new study* by scientist Dejan Stojanovic into the critically endangered Orange-bellied Parrot has highlighted the need to learn more about the tiny parrots when they undertake their unenviable mission of flying across Bass Strait from their breeding grounds in Tasmania to mainland Australia.

With the parrots’ desperate plight in the forefront of their minds, keepers and veterinary staff at Zoos SA have enthusiastically begun preparations for their role in the Orange-bellied Parrot Tasmanian Program by preparing two separate groups of the migratory parrot for release-to-the-wild.

Firstly, a group of four Orange-bellied Parrots, three young and one adult, are completing the final stages of their quarantine in Adelaide Zoo’s Animal Health Centre before (COVID-19 restriction permitting) heading to Tasmania for the start of the breeding season.

“All the birds are doing well,” said veterinary nurse Rebecca Probert. “They have one more round of testing to go before they can hopefully be moved to Tasmania.”

“A species coordinator decides which birds will pair,” says Chad Crittle, Adelaide Zoo’s Senior Keeper of Birds and Herpetofauna, “we then gather the birds, worm them and put them into the breeding facility.”

“The birds usually take interest in each other straight away and we hope to see eggs by early October.

“Birds usually lay between four to five eggs and it takes 21 days for them to hatch.

“We check the nests daily and part way through incubation we candle the eggs to check if they are fertilized, these are then numbered and recorded.

“Sometimes a bird will have no fertilized eggs, so we will move fertile eggs from a large fertilized clutch to this bird. We do everything we can to help these birds including, where necessary, carefully hand-raising chicks.

“We expect any chicks to start flying in about four to five weeks from hatching which is a wonderful sight to witness.

“Our fingers are crossed that this year is a bumper year – these little birds really do need all the help they can get,” finished Chad.

Adelaide Zoo recently received 10 nesting boxes, generously made for them by the Kersbrook Shed Inc.

The Orange-bellied Parrot is a small ‘grass parrot’ and one of only a few migratory parrots in the world and is sadly listed as critically endangered by the International Union of Conservation of Nature (IUCN) and the Commonwealth’s Environment Protection and Biodiversity Conservation (EPBC) Act 1999.

In January this year, only 23 birds returned to the Melaleuca, the known breeding location for the bird. However, the wild population had a productive breeding season as did the captive population, resulting in more than 100 wild-bred and captive-bred-and-released OBPs migrating from Melaleuca in autumn 2020. The Orange-bellied Parrot Recovery Team, of which Zoos SA is a member, are therefore cautiously optimistic about the number of OBPs that will return to Melaleuca in spring 2020.