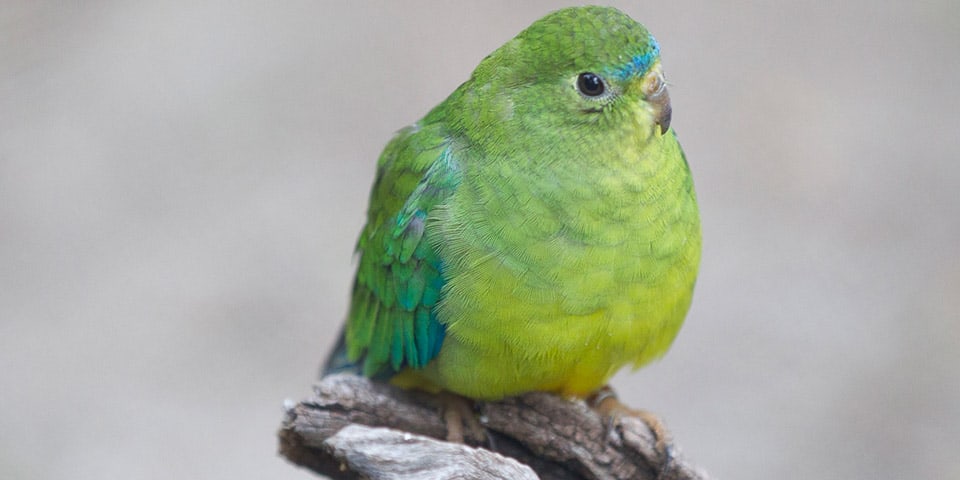 Adelaide Zoo is home to a small group of critically endangered Orange-bellied Parrots. For more than 14 years the zoo has played an integral part in a national program to ensure the long-term survival of the species including housing an insurance population and participating in a managed breeding program.

By nature the species is shy and timid, which poses some challenges when managing a breeding program as they can be sensitive to changes within the environment. Considering some of the challenges and the labour-intensive nature of the program, Adelaide Zoo has experience great success over the years raising a number of chicks, some of which have been released back into the wild.

Although the majority of our breeding birds are housed in an off limits area of the zoo, the colourful parrots can be seen in the Australian Native Birds aviary, behind the pelicans.

The Orange-bellied Parrot is a migratory bird that historically ranged from the Yorke Peninsular in South Australia, along the coasts of Bruny Island in southern Tasmania to Sydney, New South Wales.

Rarely found more than 6 kilometres from the coast, they live in coastal areas that have rough grasslands, tidal flats sand dunes and swamplands.
The Orange-bellied Parrot is ranked as one of the world’s rarest and most endangered bird species with estimates of less than 50 Orange-bellied Parrots remaining in the wild.

The primary reason for its decline is habitat fragmentation and degradation through grazing, agriculture and industrial development, as well as predation by feral cats and foxes. In addition the species is in competition for food and nesting sites from the introduction of other seed-eating birds.

Love Orange-bellied Parrots? Join our colony and ensure these special parrots stay a beat ahead of extinction! There are many ways you can help support these colourful creatures!