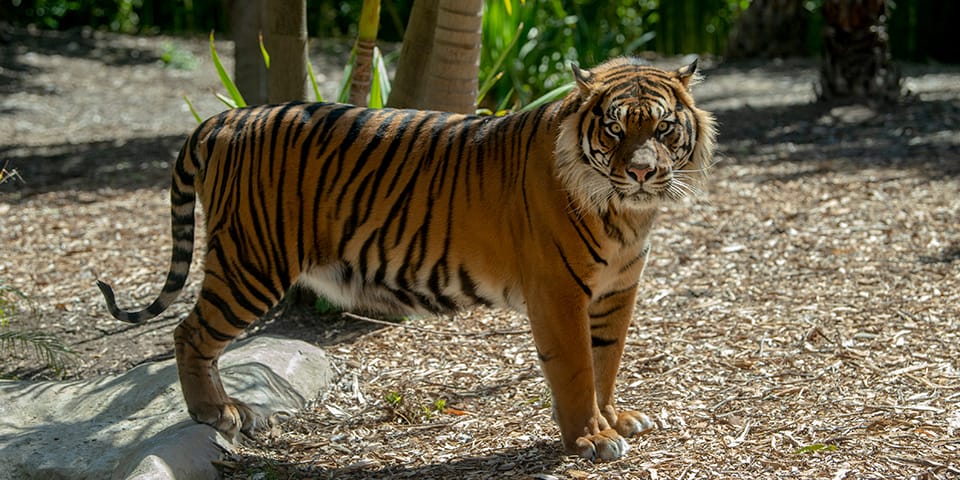 Kembali was born at Hamilton Zoo in New Zealand on 16 November, 2014 and has called Adelaide Zoo home since mid-2018.

This big boy is very relaxed and absolutely loves his food – he isn’t scared to chomp through bones and finish every last bite! He loves to spend his days relaxing amongst the bamboo of his exhibit or taking a quick dip in the pond when it’s really hot.

Excitingly, Adelaide Zoo has also welcomed five-year-old female, Delilah, from Australia Zoo on New Years Eve, 2021. Delilah is now out and about in the Immersion exhibits! It is our hope that together with Kembali, the two will go on to have cubs, which is such an important part of our conservation efforts for the species!

Tigers are the largest living cats in the world, with the Sumatran Tiger being the smallest of the six tiger subspecies. Sumatran Tigers inhabit the tropical rainforests on the island of Sumatra, Indonesia.

The pattern of tigers’ stripes is unique to each animal, just like fingerprints are to humans. The stripe pattern is found on a tiger’s skin and, if shaved, its distinctive pattern would remain. Sumatran Tigers also have webbing between their toes, which makes them good swimmers. Tigers make many sounds, including roaring, chuffing, growling and mewing.

One hundred years ago it is estimated that there were 100,000 wild tigers – today the number is thought to be as few as 3,200 individuals. The Sumatran Tiger is the last surviving subspecies of tiger in Indonesia; the Balinese Tiger became extinct in the 1940s and the Javanese Tiger in the early 1980s. Current estimates indicate there is around 300-500 wild Sumatran Tigers with a rapidly decreasing trend due to habitat destruction for palm oil plantations and poaching for the illegal wildlife trade.

Love Sumatran Tigers? Join our pride and ensure tigers stay a pounce ahead of extinction! There are many ways you can help support these amazing animals!