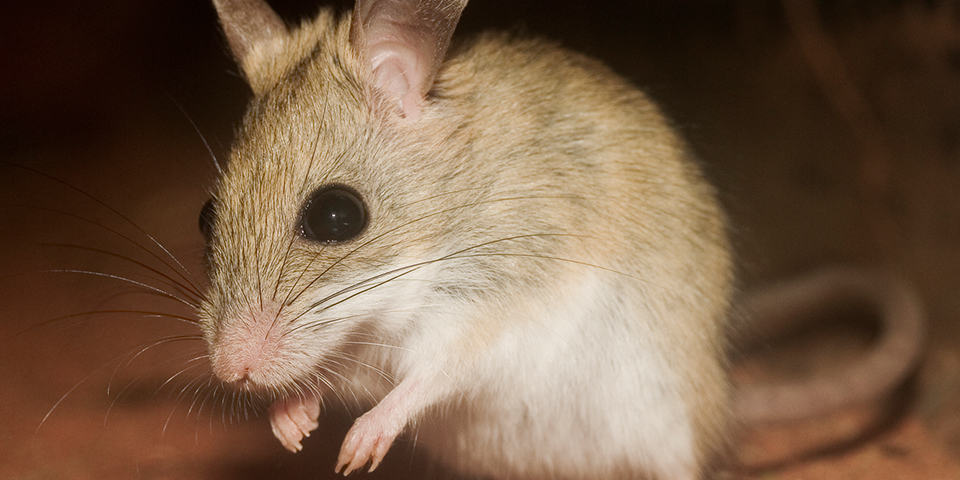 Adelaide Zoo is home to a big family of tiny Spinifex Hopping-mice. These rascally little rodents are very inquisitive and always busy, spending their days hopping around their home in Nocturnal House. Our mouse family varies in age and they often have babies! Their favourite treats to munch on are thistles, dandelions and sweetcorn.

Named for their large feet and kangaroo-like jumping ability, the Spinifex Hopping-mouse can be found in deserts of central and western Australia. These remarkable rodents are perfectly equipped to survive the harsh desert – they can raise their body temperature to make their surroundings feel cooler and they can survive without water by using their amazing kidneys to absorb every drop of water from their food. They’re nocturnal, spending their days beating the heat in underground burrows which can be as deep as a metre underground and coming out at night to forage for leaves, shoots, roots and insects.

The Spinifex Hopping-mouse is slightly larger than a common mouse, growing to nine to thirteen centre metres long and weighing 35 grams. Its long hind legs and tail allow the mice to move quickly to escape prey. They live in small family groups of up to ten individuals in deep burrows and the wild population fluctuates, exploding after rain.

The conservation status of the Spinifex Hopping-mouse is listed as of Least Concern, but habitat destruction is impacting on their numbers in the wild.

Love mice? Join our family and ensure Australian natives like the Spinifex Hopping-mouse stay a hop ahead of extinction! There are many ways you can help support these tiny critters!