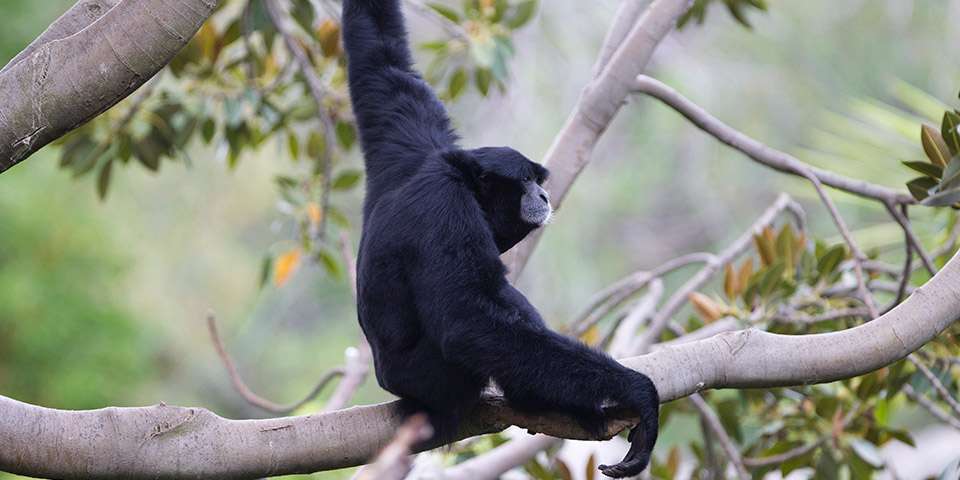 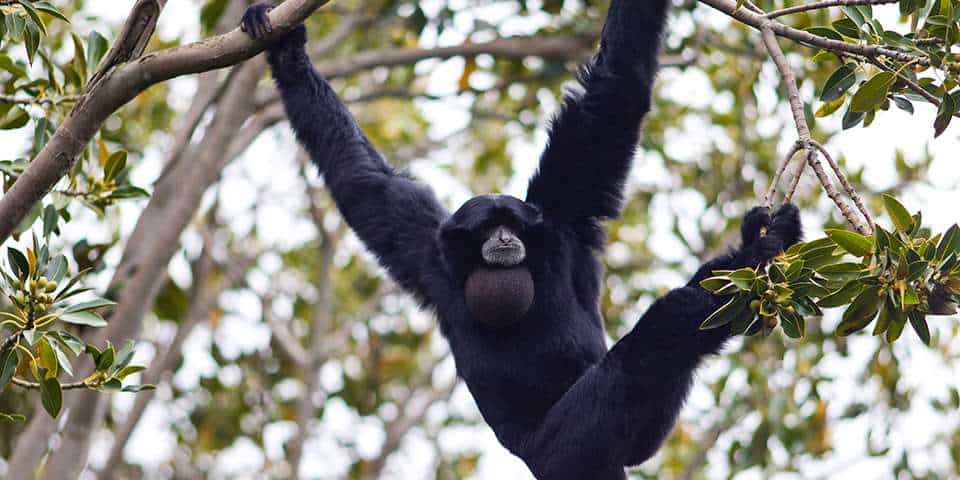 The Siamang is well known for its loud, throaty call.

Adelaide Zoo is home to two siamangs who live on their leafy Southeast Asian island habitat. Dominant male, Niran was born on 24 June 1989. He can be recognised by his distinct grey hair and is very much the peacekeeper of the pair. His son, Jars, was born on 24 June 2001 and can often be seen sitting near the running water of the pond surrounding his island home. The duo’s favourite treats are grapes and environmental enrichment, especially fig leaves covered in seeds.

The Siamang is species of gibbon native to the forests of Malaysia, Thailand and Sumatra. They are the largest of the lesser apes, usually at least twice the size of other gibbons.

Siamangs live in small monogamous family groups of a dominant male, female and their offspring, ranging from infants and sometimes sub-adults. Males tend to offer more parental care than other gibbon species, helping to care for the infant the majority of the time around the age of eight months old.

The Siamang is well known for its loud, throaty call. These calls are usually heard in the early morning and throughout the day, easing off after mid-day. These loud calls help mark their territories and strengthen bonds between the family group. The call is actually a duet between the male and female, with each having a very specific part to sing.

Grooming is one of the most important social activities among family members and usually takes place between the adults in the morning and the adults groom the juveniles later in the day.

The greatest threat to the Siamang is habitat loss caused primarily by logging, forest conversion for agriculture and the clearing of land for palm oil plantations and poaching and hunting for the illegal pet trade. To obtain Simangs for the illegal pet trade, hunters must first kill the mother, since Siamang females are highly protective of their infants, in order to obtain the infant.

Love Siamangs? Join our family and ensure Siamangs stay a swing ahead of extinction! There are many ways you can help support these intriguing creatures!