Adelaide Zoo and Monarto Safari Park are now open and you must book a ticket prior to your visit. Following SA Health directions, face masks are now mandatory at all times while visiting. Read More 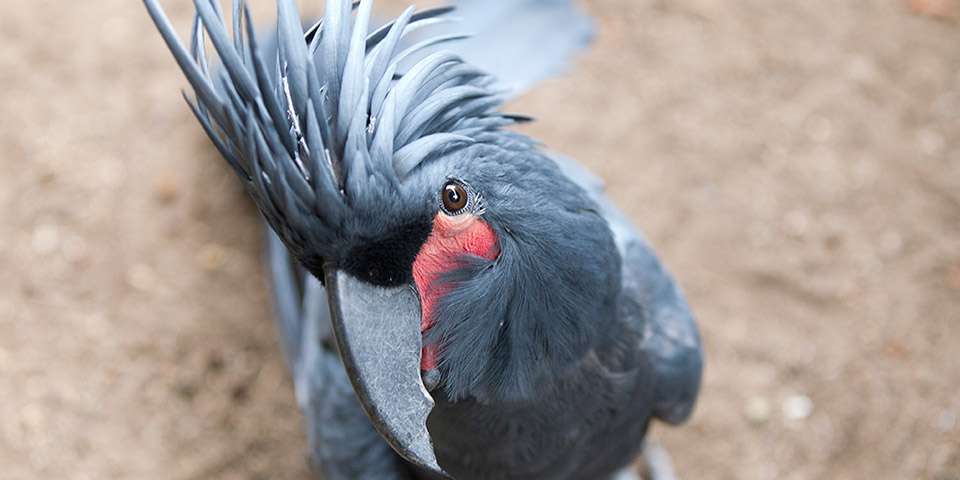 Adelaide Zoo is home to a family pair of Palm Cockatoos and their three offspring. Ben, arrived at Adelaide Zoo in 2004 and shortly after took up residence with the zoo’s female Palm Cockatoo, known affectionately as Ms Ben, who arrived in 1993.

Ben’s a funny character and is commonly found storming around the ground of his aviary torn between getting the zoo keeper’s attention, defending his territory and spending time with his lady. He loves his crest to be scratched and if the zoo keeper is not doing it enough to his satisfaction, he’s known to grab their finger, in his foot, and use it to scratch his crest! Ms Ben is sweet and caring, although shy with zoo keepers and very protective of her nest.

Seisia is the pair’s oldest daughter who hatched on 5 October 2010. She was artificially incubated and hand-reared by zoo keepers as at the time her parents had not yet been able to successfully incubate an egg. She’s a very affectionate bird and thoroughly enjoys spending time with the zoo keepers. She also loves having her crest scratched, a trait possibly inherited from her dad, and her favourite treat is Macadamia nuts.

The Palm Cockatoo has one of the largest bills of all the parrots. The bill is unusual as the upper and lower mandible do not touch until a certain length, meaning it can use its tongue to hold a nut in place to crack it open.

Palm Cockatoos are very sought after in the avian trade. It’s illegal in Australia to trade any bird caught from the wild and any trade requires strict import and export permits. As with many rainforest dwelling species, the Palm Cockatoo is threatened by deforestation and habitat loss.

Love Palm Cockatoos? There are many ways you can help support these inquisitive birds!

Today’s Teddy Bears Picnic saw Wang Wang and Fu Ni have some pawsome fun for their birthdays. Thanks to… https://t.co/6TCqD20rXN