He’s one Lucky Boy: meet the little Warru with a lot of bottle 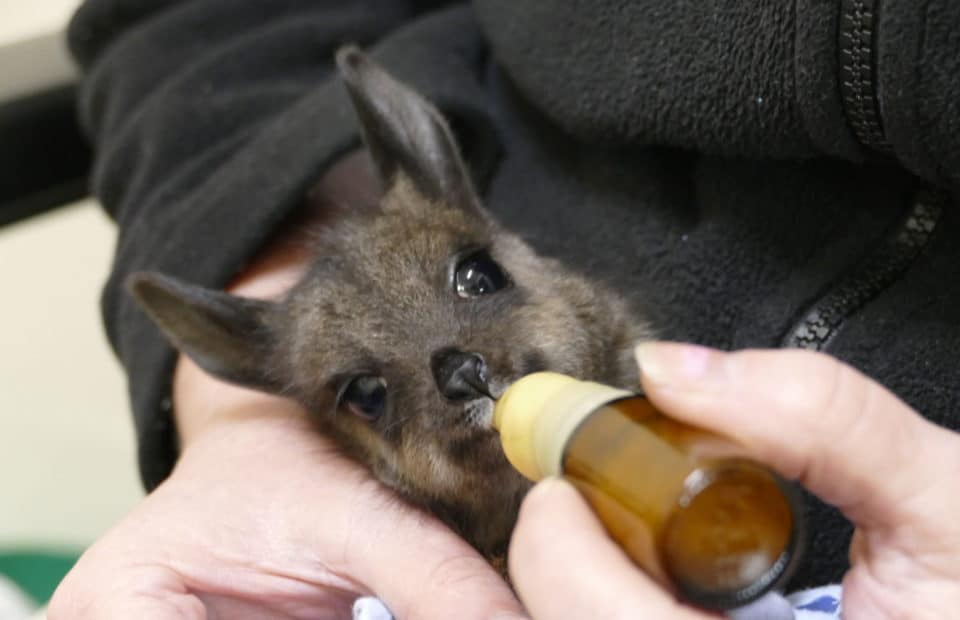 He’s one Lucky Boy: meet the little Warru with a lot of bottle

Keepers at Adelaide Zoo have revealed they’ve had their hands full hand-raising a tiny Warru joey.

When the male Black-flanked Rock-wallaby arrived in early April, he weighed just 250g (the same as a cup of sugar) and was only starting to grow his fur.

Thrown from his mother’s pouch (as a survival response to potential predators) he was discovered and taken from the APY Lands to Adelaide Zoo for round-the-clock care. The Warru Ranger group from Mimili chose the fitting name ‘Lucky Boy’ for the plucky little joey.

“When he first arrived, he needed to be fed every four hours. It was just like having a newborn,” said Assistant Curator, Deb Barry.

“Now he’s a little older and bigger, he is being fed three times a day with a feed at 6am, 2pm and 10pm.

“Fortunately I’m sharing the care with fellow keeper Michelle so we are managing to get some rest between shifts.

“Lucky Boy comes into the office on a daily basis and has his own playpen to explore complete with browse, a selection of hammocks and pouches.

“He has a big personality for such a little joey. He is inquisitive, strong-willed, and very robust. He’s also just started to come out of his pouch more often and is bouncing around.

“When Lucky Boy is weaned he’ll be big and strong enough to return to a semi-captive area of the APY Lands along with another Warru which is being cared for at sister site Monarto Safari Park. Returning to Country is an important part of the Zoos agreement with Traditional Owners. Knowing that he is going to return to his home makes any lack of sleep totally worth it,” finished Deb.

Lucky Boy recently got to enjoy his first steps onto sand and enjoy a nibble of browse in his back-of-house exhibit.

A little nervous about his new surroundings, he sought comfort on Deb’s lap until he built up the courage to do more exploring.

This Black-flanked Rock-wallaby, known as Warru in Pitjantjatjara and Yankunytjatjara languages, will play an important role in his species’ future. Lucky Boy is part of a long-standing partnership between Zoos SA and the members of the Warru Recovery Team, including APY Land Management, Traditional owners, Anangu Warru Rangers, and the broader Anangu community.

Zoos SA supports and works alongside The Warru Recovery Team (WRT) to help recover populations of Warru in South Australia and provide employment and training opportunities for Anangu, the traditional owners, landholders, and community members of the APY Lands.