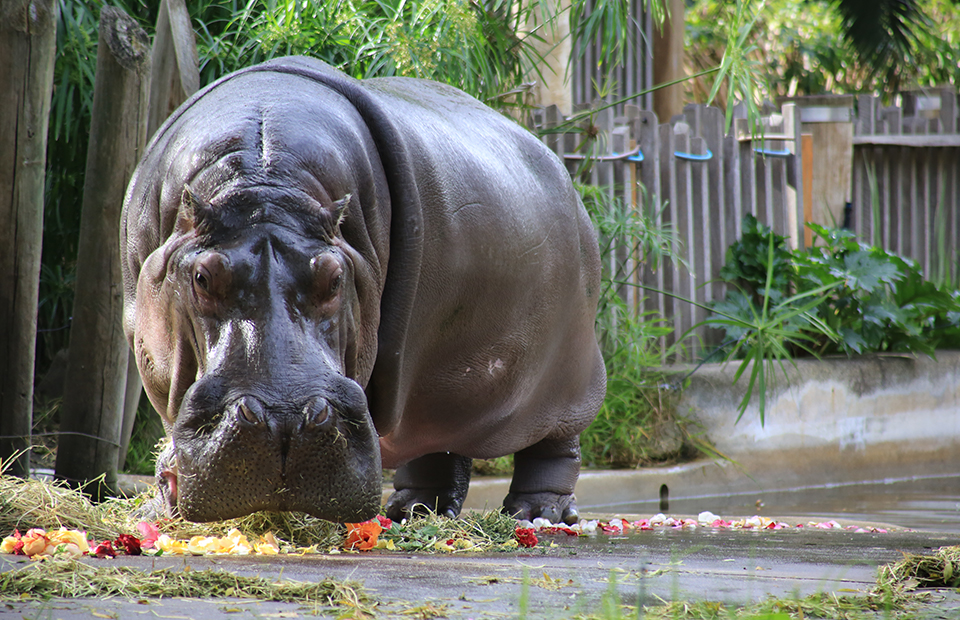 This year marks the end of an era with the passing of a truly remarkable Hippo we lovingly knew as Brutus. This year also marks a celebration of his 45 years here at Adelaide Zoo and a tribute to his life and the impact he has had over his lifetime.

“Standing by the Hippo pond, you hear the children – ‘Where is he? Where is he? Then suddenly there’s a large ripple on the water & you hear, ‘There he is!’ Surfacing with great gusto is our beloved Hippo, Brutus, with either a quick breath and if you’re lucky, an opening of his gigantic jaws – down he goes, only to resurface again – to who knows where!”- Pauline Mysak, Volunteer. 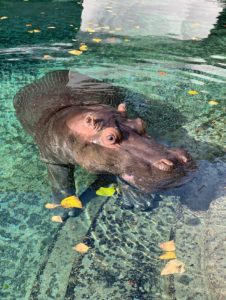 Brutus the Hippopotamus was born at Taronga Zoo back on 18 May in 1965. In 1969, Brutus was then sold to Ashton’s Animal Kingdom, and then again purchased from Ashton’s Animal Kingdom, Brisbane in 1975 for $2000 (physically coming from Ashton’s sister park Lion Safari Park in Bacchus Marsh, Victoria). He was originally named ‘Albert’ until his name was changed to Brutus when he arrived at Adelaide Zoo in January 1975 with his long-term partner Susie (formerly named ‘Victoria’). Both of Brutus’ parents were wild caught animals, being founder animals of their species in Australia. Brutus had been the oldest hippo in the region for many years, and one of the oldest on record in the world according to ZIMS (Zoological Information Management System) data.

Always an animal that was deserving of respect, in his younger years there have been stories and legends of a ferocious and agile Brutus picking up a water buffalo and tossing it aside. Another instance of Brutus climbing up at the end of his raceway and smashing up the iron roofing has remained a reminder of his wonderful abilities, a stark difference to the ‘old man’ we see nowadays. For many unsuspecting visitors the surprise of seeing a male hippo spray his dung several meters, and in some cases wearing said dung spray afterwards, has been a memory for staff, volunteers and visitors alike.

For many of us, growing up and visiting the zoo before our zoo careers began, we have numerous memories of Henryk Maddon as the hippo keeper, always in awe watching him hosing out both hippos’ mouths and the special bond they shared. It too became clear to many of us newer keepers that the hippos’ relationship with Henryk was truly special and they were very responsive to a thick Polish accent, seeming to prefer it over an Aussie accent. Evidently, Henryk has had many special moments with Brutus and Susie and has been able to do things with these animals based on their level of mutual trust for each other that many of us can only dream of. Even during visits when Henryk was working in other areas of the zoo, at the sound of his voice you would see their ears quickly prick up with interest.

In more recent years, Mary Johnson took on the hippo round after many years of working with these animals in various capacities. She too had an excellent relationship with Susie and Brutus, her relationship was strong and special enough to successfully perform a voluntary tusk trim on Brutus over a period of months. For many of us, working with animals like Susie and Brutus has been an absolute honour and I think it is fair to say working with these animals has taught us a lot about ourselves and helped shaped our skills and knowledge into the keepers we are today.

For many of the current keepers, we had only ever known Susie and Brutus as more elderly animals who were always fondly thought of as ‘a sweet old couple’. Susie was lovingly regarded as a bossy and food-focussed animal, seemingly loving pats and rubs on her muzzle when out the back in their night quarters, as her eyes would roll back in total bliss. Susie was always one to finish her meals first, as though it was a race, and was always obliging at helping Brutus finish his meals too, to the point Brutus would be allowed a 30-minute head start at dinner time to make the most of his alone time devouring a generous mound of hay. While Susie was that food-focussed and very tactile animal, Brutus was more of an independent animal who came across as an unaffectionate tough guy, but deep down we knew there was a big softie inside him. Sometimes we would come in early on a cold winter morning and see the two hippos snuggled up on their heated mats in their night quarters, sharing meals with each other, gentle ‘play fighting/sparring’ sessions in the main exhibit pool and we would often see Brutus resting his head on Susie as they slept. Every now and then we would hear them vocalise to each other, much to our delight.

One of the most special experiences many of the hippo keepers had with Brutus would have been the privilege of giving him a tongue tickle. While waiting at the night quarter gates every now and then Brutus would slide his tongue out as though inviting us to come and give it a tickle. With each tickle, the soft, almost velvety tongue, would slide out further and further until eventually he would slurp it back inside. It was special moments like this that made his keepers really feel like they had made that special bond with their animals that we all strive for, and is something that will always stay with us. Brutus has been a wonderfully forgiving animal to work with, he was an animal who would sometimes test new keepers’ patience, at times ignoring their calls when it was time to come in at the end of day, or other times be a little demanding as he waited at the back gate to be let in for dinner early, seemingly testing his luck by trying earlier and earlier as the years went by.

In their 45 years here at Adelaide Zoo, Susie and Brutus produced a total of 17 calves in their time, the last one born in 2009. Brutus respected his distance with Susie and the calves, however only 6 of these survived past the first few days of life. Of these 6, only 2 ever bred and all 6 are now deceased. One Granddaughter (Brindabella, born 9 December, 1990) and one great-granddaughter (Pansy/Zawadi, born 18 November 2013) – both at Werribee Zoo, Victoria – are the only surviving descendants of Susie and Brutus at the time of writing. 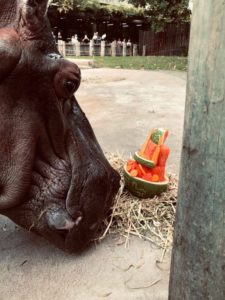 During years of the routine Thursday pumpkin these two enjoyed on their pond clean days, there was a time that Brutus got his pumpkin stuck between his top tusks. He got out of the water, walked over to the small keeper gate with his mouth open and stood there patiently allowing his keeper to knock it out and then proceeded to mash the pumpkin up as he ate it. It was not until Brutus’s 50th birthday that we tried something a little sweeter; a watermelon. As he bit into his birthday watermelon is was as though his eyes lit up and him slurping up all the juice off the concrete once he was finished made it even more evident how much he enjoyed this special treat, a treat which was carried on over subsequent birthday celebrations, and then replacing his Thursday pumpkin.

Sadly, Susie was euthanized on 20 July 2017 due to age-related issues with her mobility and quality of life, and in the time leading up to this we saw Brutus always staying in close proximity to her. It was a tough day for her keepers and the wider zoo community, and it was evident in the days and months following that it was just as tough for

Brutus. Brutus showed clear signs to us that he too was mourning with us and we knew we were going through this together. In Brutus’ later years, and once Susie passed away, we no longer had those days of tongue tickles or hearing him vocalise with his grunty-roar and it took a few months for Brutus to find his place in the world by himself, particularly as it was more apparent with his visual impairment how important Susie was as a cue for movements throughout the day. Brutus got back into his swing of things and his keepers continued to spend time with him, play with him with the hose, and spoil him with daily treats.

For the last 45 years our hippos have served as ambassadors for their species, connected people with nature, and inspired some special individuals to raise money for these animals and for the zoo. They have made us laugh, smile and cry and filled our hearts and our minds with treasured memories that will live on.

For the last 10 years, Susie and Brutus had been there to welcome thousands of guests come through the new entrance of the zoo, and there to farewell them until they next visited. They have provided one-of-a-kind 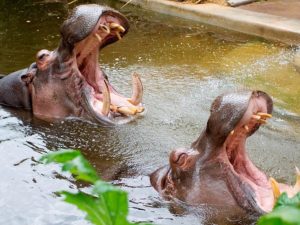 experiences through brief animal encounters and behind the scenes tours, drawn large crowds at the daily keeper talks and have equally been a special member of our zoo family to our volunteers who have been able to share their stories about Brutus and Susie, and keep an eye on them over the years from the information desk.

“I often refer to Brutus as our Honorary Office Assistant in the Info Desk/Office. I love his ‘party trick’ when he’s gets out of the water, turns his backside to the visitors, lifts his tail in a circular motion & spreads the love to the visitors.” – Lesley W, Volunteer

The last couple of years have gotten harder and harder for Brutus, especially those chilly winters. We have watched him slow down further and further and he has continued to soldier on through any discomfort right until the end. We have continually become more lenient, allowing Brutus to dictate when he wants to get up in the morning and come in at the end of the day. While we had been planning a big 55th Birthday celebration it became more and more clear that it was unlikely we would get him there, so instead we have been loading up his recent meals with all the extra treats our big boy deserves: plenty of melon, loads of greens and even some banana and herbs.

Saying goodbye to our dear friend has been incredibly difficult for us all and is something we have been dreading over recent time. The inevitable loss of Brutus will be a loss that is felt far and wide for a long time to come, it wont be the same starting our day and not seeing our friend each morning.

Who knew the Thursday hippo pond clean would be a task that we would soon miss. 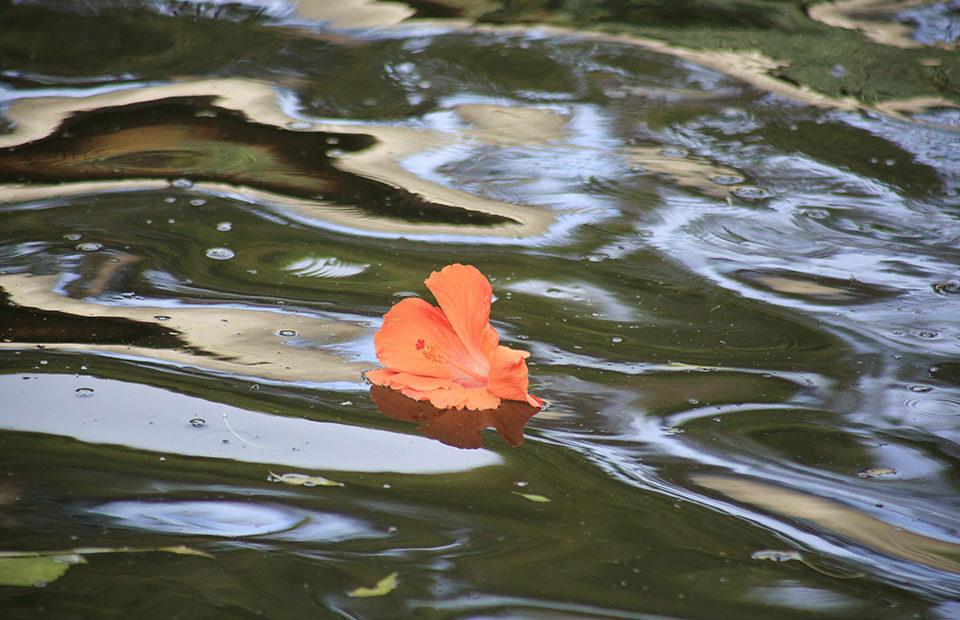