Tiger star shows off her stripes (and spots) at Adelaide Zoo 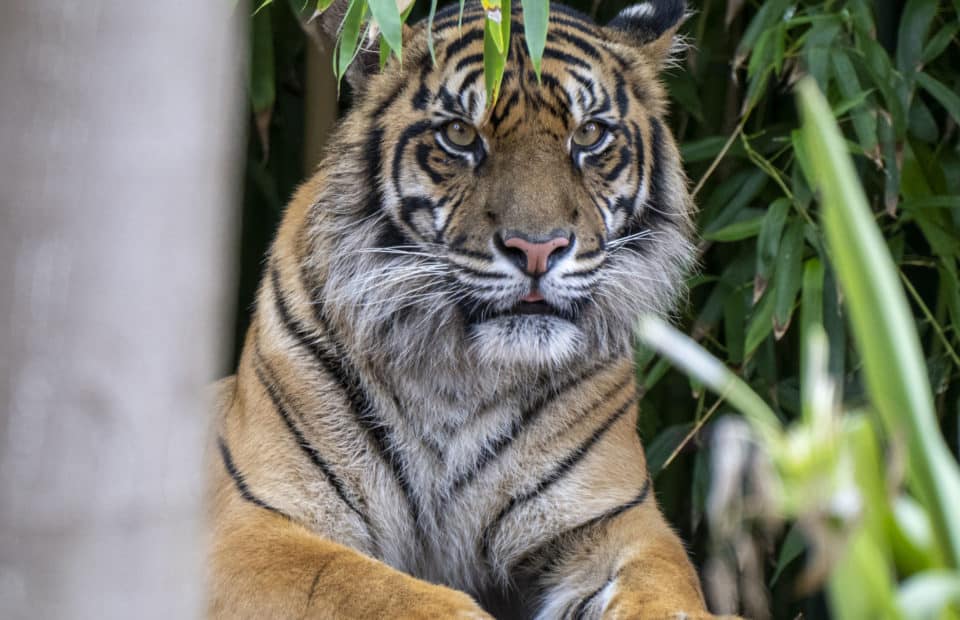 Tiger star shows off her stripes (and spots) at Adelaide Zoo

Critically-endangered Sumatran Tiger Delilah has made her dazzling debut at Adelaide Zoo’s exhibit with the public encouraged to come in and give her a roaringly warm welcome!

The five-year-old Sumatran Tiger, the rarest and smallest of all tiger species, arrived in Adelaide on 31 December after transferring from Australia Zoo in Queensland.

“She’s super calm and already flirty with male Kembali. We have seen and heard her chuffing to him and they have locked eyes across the corridor and through the mesh.

“Delilah’s unusual as she’s one of the only few Sumatran Tigers I’ve worked with who has spots as well as stripes. Hopefully tiger fans big and small will come in to welcome Delilah to her new home,” finished Arliah.

Once Delilah has settled in to her new surroundings, bonded with her new keepers and we have tracked her cycle, we will introduce her to seven-year-old male Sumatran Tiger, Kembali. Hopes are that the two will produce tiger cubs, thereby supporting efforts to ensure the survival of the critically endangered species.

The Sumatran Tiger is the last surviving subspecies of tiger in Indonesia with only 300 to 500 wild Sumatran Tigers remaining due to habitat destruction and poaching for the illegal wildlife trade.

The destruction of the Sumatran Tiger’s habitat through cultivation into palm oil plantations has seen their range and prey greatly reduce and numbers dwindle to a critically endangered level.

In more tiger news, conservation followers will be excited to learn that the sixth day of the lunar Year of the Tiger and Delilah’s sixth birthday coincide (6 Feb).

To mark the auspicious alignment, Zoos SA is working with the China Town Association to present a celebratory Tiger weekend on 5 and 6 February 2022. Held at Adelaide Zoo, the event will feature giveaways, birthday celebrations for Delilah and more. A real must for fans of the striped species! Follow our socials for further updates!

We advise all visitors, including members, to book online prior to their visit.

Visitors aged 16 and older who choose to come to Adelaide Zoo or Monarto Safari Park will be required to show evidence that they have been fully vaccinated (or are exempt from vaccination by order of the Chief Public Health Officer).