Tawny by name, tawny by nature 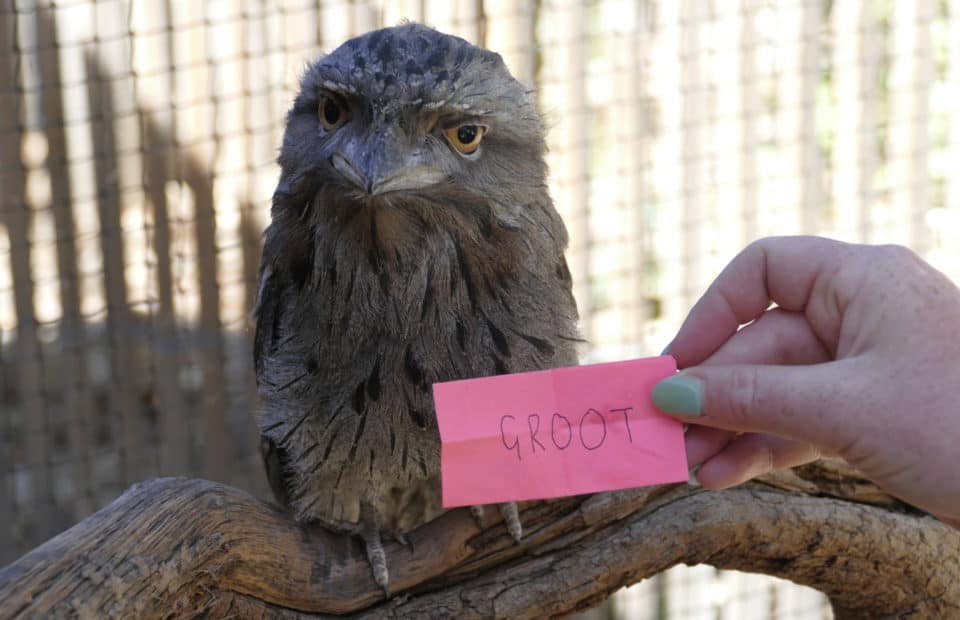 Tawny by name, tawny by nature

Keepers were very egg-cited to see what the little one would select between Groot and Barkely.

With each name in a bowl of it’s favourite snack, the chick was presented with the options and after careful consideration it picked Groot with a flourish and beak-ful of mealworms.

“Tawny Frogmouth are the masters of camouflage, their feathers have an incredible pattern to blend in with trees and protect them from predators,” he said.

“Our final names for selection were Barkley, to reflect the bark patterns in its plumage, and Groot after the Guardians of the Galaxy comic book character who is a tree.

“We were excited to see which one the chick would pick. As it was hand-raised in the Variety Children’s Zoo Nursery, it is used to eating from the bowls.

“When we presented them to the chick we placed a name in each bowl so it could decide. It was quite keen and selected Groot as the winner!”

Nine-week-old Groot has been practicing flying and will be released into an aviary once fully fledged. Keepers are unsure of Groot’s sex as of yet, however, they will send a feather sample to determine this in the coming weeks.

“Groot has been doing really well and getting better with flying,” Chad said. “Like anyone on their L-plates, Groot is still practicing but is doing a great job.”

Tawny Frogmouths are found across Australia. While numbers remain stable, in recent years there has also been a significant overall decline in their number in the wild.

When Tawny Frogmouth chicks first hatch, they have thick, fluffy white down. By two weeks they develop pale-grey down and pin feathers start to emerge on their wings and tail.

Adult plumage is a blend of spots, blotches and streaks of grey, brown, black and tawny, which blend in perfectly with trees and foliage.

Tawny Frogmouth are nocturnal and nesting pairs mate for life.

For more information about the birds at Adelaide Zoo or to book your tickets, visit www.adelaidezoo.com.au.