Phascogales cross border in bid to save species 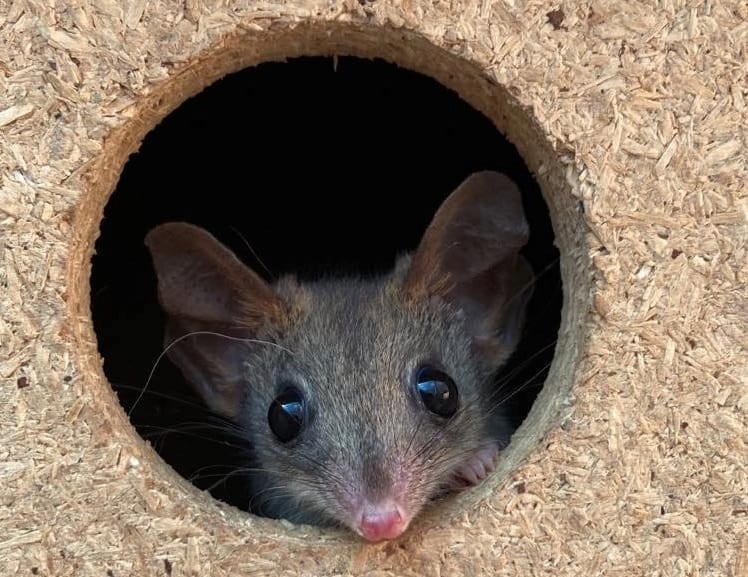 Phascogales cross border in bid to save species

The 12 females and two males will be added to the population of 60 released into the national park in November 2021. The Red-tailed Phascogales were driven over 450km from a captive breeding program at the Adelaide Zoo and released at night into nest boxes in the 9,570-ha (around 23,650 acres) fenced feral predator-free refuge at Mallee Cliffs on 30 March.

On arrival at Mallee Cliffs National Park, AWC ecologists performed health checks on the new residents and fitted them with specially designed tracking collars which will be used to monitor their transition to the new environment.

These collars will be used to monitor initial survival and dispersal and will be removed after four weeks.

“The phascogale is the eighth mammal listed as extinct in NSW that has been returned to NSW national parks in the past three years,” Mr Griffin said.

‘Within a few years, we hope to remove at least 10 mammals from the NSW extinct list – the first time that will have happened anywhere in the world.

“State-wide there will soon be 65,000 hectares of feral predator-free areas on national park estate, including this site at the Mallee Cliffs. They’re being established as an essential part of the NSW Government’s conservation strategy, aiming to prevent extinction.”

NSW National Parks and Wildlife Area Manager Jo Gorman said once abundant across much of arid and semi-arid Australia, red-tailed phascogales now occupy just one per cent of their former range, suffering a catastrophic decline following the arrival of cats and foxes.

“The Mallee Cliffs National Park feral predator free area is aiming to increase the nationwide population of red-tailed phascogales by nearly 20 per cent to around 1,660 individuals,” Ms Gorman said.

In 2021, AWC, in collaboration with Adelaide Zoo established a captive breeding program for Red-tailed Phascogales. The Phascogales have been breeding successfully over the last 12 months and the newly introduced animals to Mallee Cliffs are the offspring and founders from this program.

The team at Adelaide Zoo have thoroughly enjoyed looking after the Red-tailed Phascogales, especially the mums with their jelly-bean sized joeys on board.

“Our keepers have been working hard to ensure that the captive-bred phascogales will thrive in the wild, and are excited to be a part of the release at Mallee Cliffs National Park,” she said.

“Red-tailed Phascogales are just one of the species that Zoos SA are partnering with AWC to return to the wild, and we’re looking forward to continuing to do our bit to support the conservation of Australian wildlife.”

“AWC is working hard to secure the future of the Red-tailed Phascogale. The project at Mallee Cliffs National Park is unique, seeing 10 regionally extinct mammal species restored to New South Wales to recreate an assemblage and its associated ecosystem processes, that hasn’t been functional for over century.” said Dr Laurence Berry, Senior Wildlife Ecologist at Mallee Cliffs National Park.

AWC carries out Australia’s largest and most ambitious wildlife reintroduction program, re-establishing populations of threatened wildlife across an extensive network of feral predator-free fenced areas. This latest reintroduction is another important step towards restoring locally extinct mammals to NSW as part of an innovative and ambitious partnership between AWC and the NSW National Parks and Wildlife Service.

Follow our conservation road trip to release the Red-tailed Phascogales here or to find out more about Zoos SA conservation programs visit www.zoossa.com.au/conservation/.