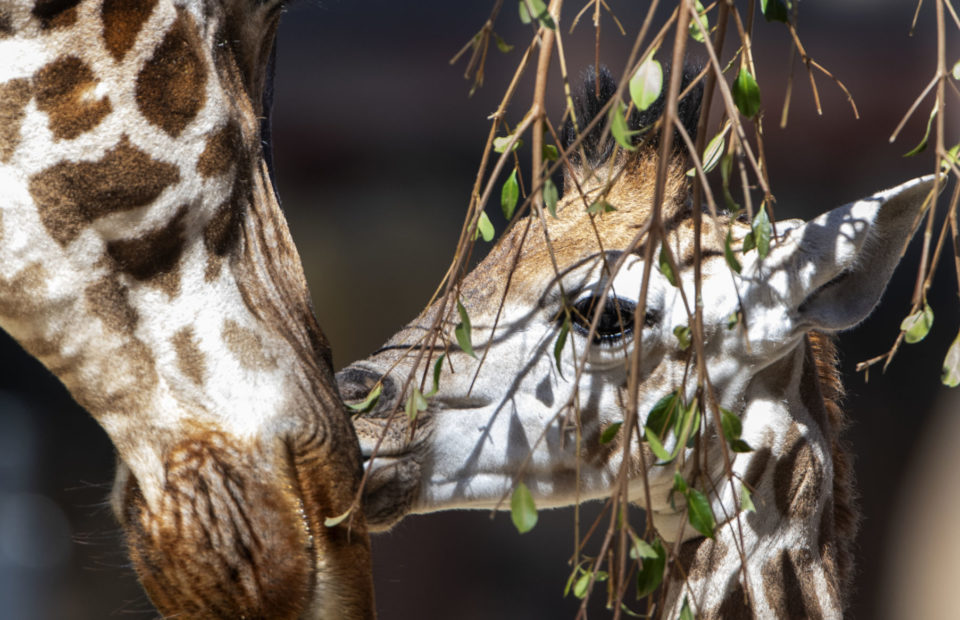 Adelaide Zoo has announced the name of its seven-week-old giraffe calf after counting the entries in a public vote to find a fitting name. The young giraffe calf is called Azizi, Swahili for beloved, precious one, treasure and valuable.

“Although this little one didn’t have the best start to life after being rejected by his mum we are really pleased to say that he is thriving,” says Director of Life Sciences, Dr Phil Ainsley.

“It’s still early days in terms of his development but he is gaining weight and height and we are very happy with how everything is going.

“He has bonded with both giraffes and the feeling appears to be mutual. We continue to monitor him closely but are hopeful that his future looks bright.

“Asking the public to choose a name for him from our list of four has been very well received with over 3,000 entrants. Clearly all our voters were on the same page as the winning name received over 60% of the votes,” says Phil.

Azizi arrived at Adelaide Zoo when he was just a few days old. He was born to mum Scarlett at Monarto Safari Park on 16 January this year but keepers soon noticed that the youngster was not getting sufficient feeds or the vital nutrients he needed and they feared his condition would quickly deteriorate.

Keepers at Monarto Safari Park and Adelaide Zoo discussed the best welfare outcome for the young giraffe calf based on their previous experience of hand raising giraffes Eyelean and Nolean. With this knowledge and his welfare in mind, they decided to move the young giraffe to Adelaide Zoo for ease of hand raising and for providing him with round-the-clock care. A Monarto Safari Park keeper was on site daily to assist.

Since his arrival at Adelaide Zoo, the young male giraffe calf has gained weight and height and now receives four bottle feeds at 7am through to 6.30pm from his dedicated keeper.  Last week the giraffe calf made his public debut to an adoring audience of visitors who noted the three giraffes were like nesting dolls as they go in size order from large Kimya, medium Nolean to the little chap himself.

Adelaide Zoo’s giraffe exhibit recently underwent Phase 1 of its expansion. Phase 2 will see the area expanded to provide approximately 2,500m² for the giraffes with the final phase seeing the exhibit providing a total of over 5,000m², making this one of the largest inner city giraffe exhibits in the country.

These upgrades will also give the giraffes a more expansive view of the River Torrens, providing them with extra enrichment in the form of watching people walk and drive by. It will also give people driving and walking along the riverbank an opportunity to see over 200 metres of the giraffe exhibit from outside the zoo.

While Zoos SA celebrates the announcement of the young giraffe’s name there is little to celebrate when it comes to his wild cousins. The species is listed by the IUCN as vulnerable to extinction. While many people believe this species is unaffected by agriculture, hunting and human intrusion and disturbance this is sadly not the case. In fact, the giraffe is facing what scientists call ‘The Silent Extinction’ and Zoos SA suggests that those interested in the species’ survival find out more at Adelaide Zoo, Monarto Safari Park and other accredited conservation institutions.

Zoos SA expects to be busy over the long weekend and members and visitors are kindly reminded to book online prior to visiting at www.adelaidezoo.com.au/tickets

Experience the thrill of hand feeding our Giant Pandas, mingling with our meerkats or feeding a hungry tiger their meaty lunch.