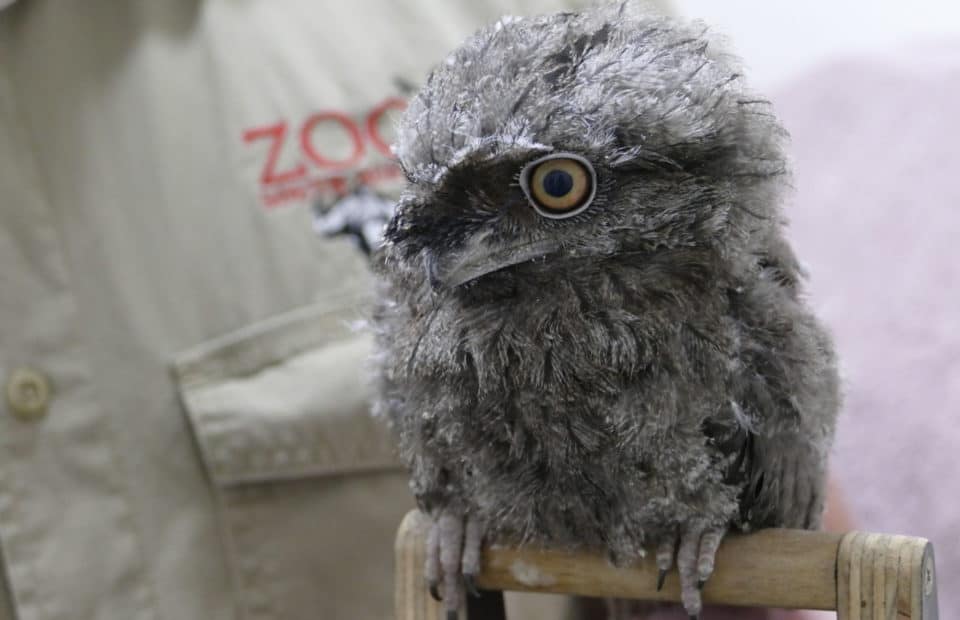 We have egg-citing news! Adelaide Zoo has welcomed a Tawny Frogmouth, Black-necked Stork, and six Swift Parrot chicks to the nest.

The Tawny Frogmouth and four of the Swift Parrot chicks have been cared for in the Adelaide Zoo bird nursery by dedicated keepers.

The little ones have almost fledged and will soon be released into the Swift Parrot Aviary.

The Tawny Frogmouth chick will be looked after in the Variety Children’s Zoo Nursery and can be able to be seen by visitors through the window from today! Zoos SA will also be holding an exciting naming competition in the coming weeks for our new feathery friend.

You can now also visit the Black-necked Stork chick opposite the Nocturnal House. He has officially been named Karumba, after the coastal town of the gulf of Carpentaria.

Senior Keeper of Birds and Free Flight, Chad Crittle, said the Tawny Frogmouth hatched three weeks ago and was a bit of a surprise for the team.

“We haven’t had a Tawny Frogmouth chick for years, this little one was a bit of COVID baby,” he said.

“The mating pair have had 14 chicks between them but over the last few years they haven’t had any.

“We don’t know what changed, but we did add two young Tawny Frogmouth into the aviary and having a young male there might have stimulated breeding!”

For the critically-endangered Swift Parrot, the addition of six chicks is very exciting news.

“Mum did such a great job and raised four chicks by herself. Normally, they would only raise two,” Chad said.

Swift Parrot numbers have dwindled to somewhere between 1,000 and 2,500 mature birds in the wild, according to the IUCN Red List of Threatened Species.

The Action Plan for Australian Birds 2020, released last week, revealed that up to 216 Australian birds are now threatened – compared with 195 a decade ago.

In the report, the Swift Parrot was listed as one of the 23 critically endangered birds at risk of extinction.

Land clearing and overgrazing were noted to have significantly impacted numbers in the wild, with the report also detailing the impact of climate change on a number of these endangered species.

The new chicks will take the flock numbers at Adelaide Zoo to 19. The organisation has been instrumental in breeding efforts to ensure the Swift Parrot species survives well into the future.
Swift Parrots breed in Tasmania and fly across Bass Strait to forage on flowering eucalypts on the mainland.

Tawny Frogmouths are found across Australia. While numbers remain stable, in recent years there has also been a significant overall decline in their number in the wild.

When Tawny Frogmouth chicks first hatch, they have thick, fluffy white down. By two weeks they develop pale-grey down and pin feathers start to emerge on their wings and tail.

Masters of camouflage, adult plumage is a blend of spots, blotches and streaks of grey, brown, black and tawny, which blend in perfectly with surrounding trees.

Tawny Frogmouth are nocturnal and nesting pairs mate for life.

To find out more about our conservation work or to donate to help save species like the Swift Parrot or Tawny Frogmouth, please visit www.adelaidezoo.com.au or www.zoossa.com.au.