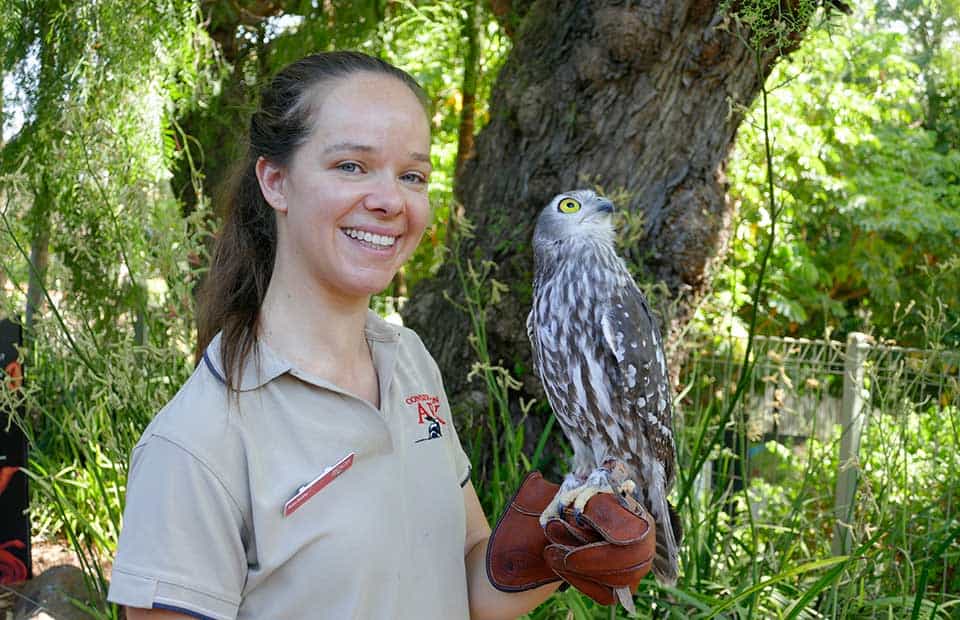 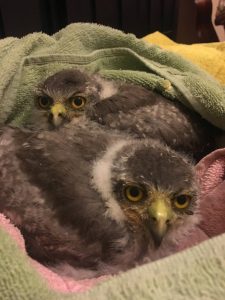 Born in September last year at Gorge Wildlife Park, the sisters spent two months living with Michelle as she tended to their every need around the clock.

“These little ones are growing up to be ambassadors for their wild cousins so it was important they had a lot of new experiences early on,” says Michelle.

“As well as feeding and caring for them, I made sure to give them daily time to explore the sights and sounds of the house.”

Michelle also started a training program to get the fluffy chicks used to humans as early as possible.

“Both Einstein and Pacino did some beginning training which included simple things like turning to face me and taking a step towards me,” says Michelle.

“Each time they did this they would receive a delicious mousey treat until they were comfortable enough to step onto a handling glove and calmly stay there.”

In late December, when the birds were fully fledged, they moved to their new home at Adelaide Zoo where they continued to be cared for by Michelle and the Nature Theatre team. 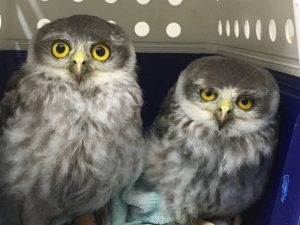 “It was amazing to see Einstein and Pacino’s personalities develop and become so different even though they had the same upbringing,” says Michelle.

Over time, the birds’ differing personalities began to ruffle some feathers.

“Einstein’s boldness starting causing a bit of trouble during Pacino’s training sessions, with Einstein taking over and being bossy,” says Michelle.

“Once this started happening we knew it was time for the owls to be housed separately and given individual training sessions specific to the learning styles of each bird.”

This saw the pair much happier, with Einstein becoming really comfortable and going for walks while on Michelle’s handling glove and Pacino gaining more confidence while taking part in more simple training activities.

Named after their interesting bark-like call, Barking Owls are actually a species of hawk-owl meaning they’re a bit different to their Barn Owl cousins who already live at the zoo.

Instead of searching for small prey, these special birds are actually incredible hunters that can take down birds their own size mid-flight, including Sulphur-crested Cockatoos!

This awesome ability is just one of the reasons Michelle is so excited to be working with them.

“Watching them grow up and learn all about the world around them is amazing – you can really see the intrigue and wonder in their big yellow eyes as they take it all in,” says Michelle.

“It’s so wonderful that we can connect such incredible birds with the public and we’re hoping that Einstein and Pacino might be ready to join our Flying Colours Free Flight Show in the future.

“I can’t wait until people can meet these special sisters!”

As a conservation charity that exists to connect people with nature, we’re so thrilled to be able to show visitors incredible creatures like the Barking Owl and can’t wait until Einstein and Pacino start their new role as ambassadors at Adelaide Zoo.