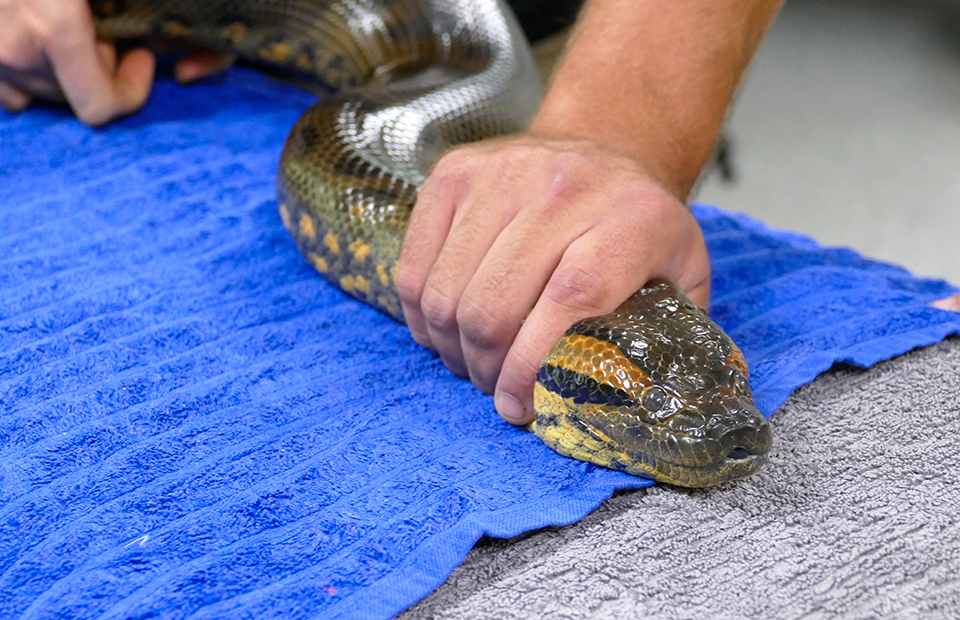 Adelaide Zoo keepers and vets recently had their hands full when a rather long animal resident visited the Animal Health Centre!

Mrs Dashwood, an almost-three-metre-long Green Anaconda, had a visit with the vet to make sure she was in tip top shape before heading to her new home in the Reptile House.

The slithery girl was measured, weighed and had ultrasounds and blood tests to check everything was in order.

We’re happy to report Mrs Dashwood passed with a clean bill of health and was all ready to move house. 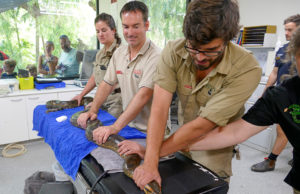 Despite their scales and somewhat sinister reputation, these reptiles have unique personalities just like their fluffier counterparts, and Mrs Dashwood is no exception.

“Within hours of her arriving to her new home, she had already found and explored places that we didn’t even know she could reach!

Mrs Dashwood was quick to settle in, swimming in her stream and even managing to slither up the waterfall, which keepers were not expecting.

“We know anacondas are great in the water but didn’t realise Mrs Dashwood would be able to scale a vertical waterfall!” said Chad.

You’ll often find this big beauty in the water as she loves swimming, especially after a big meal of her favourite food: rats.

Green Anacondas, native to South America, are one of the world’s longest snakes with large adults measuring over five metres long.

Mrs Dashwood’s move marks the first time Green Anacondas have been on display at Adelaide Zoo in four years, after she lived in privacy behind the scenes.

We’re incredibly lucky to have Mrs Dashwood at Adelaide Zoo as she makes up one of only ten of her species living in Australia and is the only Green Anaconda in South Australia.

Next time you’re at Adelaide Zoo, make sure to slither into the Reptile House and welcome Mrs Dashwood to her new home.