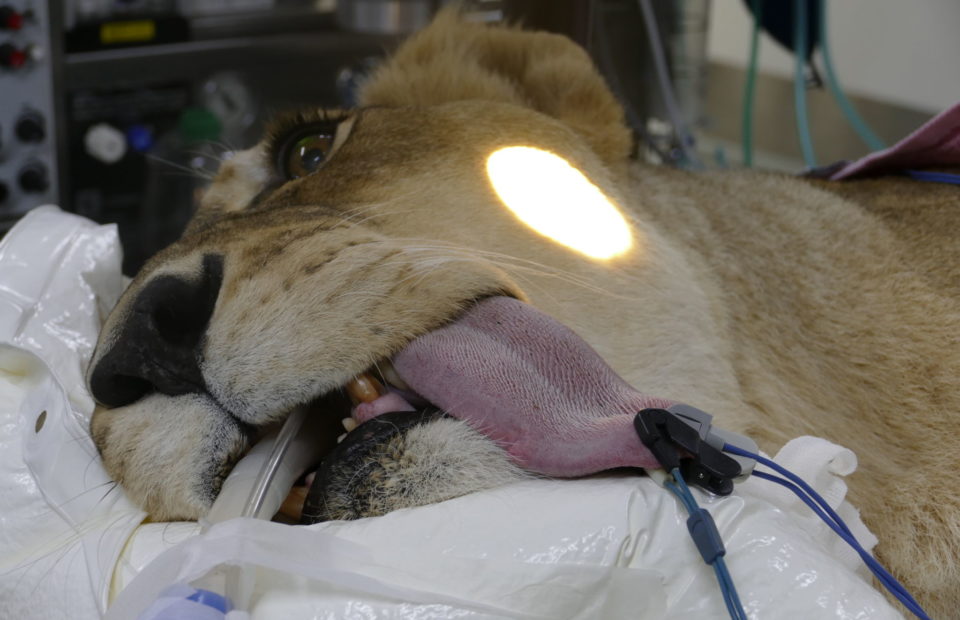 Amani, 19-years-old, was taken to Adelaide Zoo’s Animal Health Centre last week to receive attention from Tony Read, Specialist Veterinary Ophthalmologist. On examining Amani, he discovered that she had a non-healing eye ulcer.

“I see this kind of ulcer quite frequently, it’s one of the most common procedures that we undertake with older animals,” said Tony.

Explaining the procedure, which took no more than 20-minutes, Tony said: “I made a superficial cut into the cornea to remove some non-healing tissue and used Amani’s third eyelid to cover the eye. All went well and I would expect a full recovery in 7-14 days,” finished Tony.

While Tony worked on Amani’s eye, Adelaide Zoo’s team of vets and nurses gave Amani a thorough check-over, taking blood samples, assessing her body condition, trimming her nails and inspecting her teeth for dental work the team hope to carry out in the future.

Zoos SA veterinarian Ian Smith was happy with the procedure and Amani’s condition.

“We are very happy with how the operation went,” said Ian.

“Amani is 19-years-old, quite aged for a lion but is in good condition,” he finished.

Amani was returned to her exhibit and to companion African Lion male Mujambi. Vets removed Amani’s sutures today and are very happy with the results.

Amani and Mujambi are powerful ambassadors for their species. Through seeing the roarsome pair, visitors are encouraged to consider the future of lions and to act to save this special species.

The IUCN lists the African Lion as vulnerable to extinction with a decreasing population causing great concern for conservation charities like Zoos SA.
Lions historically ranged throughout Africa, the Middle East and southwest Asia. Today, the population is found in an isolated pocket of India, where the Asiatic Lion is classified as critically endangered with less than 400 individuals remaining, and sub-Saharan Africa.

Like lion numbers, habitat for lions has declined as human population, land cultivation and numbers of livestock have steadily increased in areas lions call home. Lions are often killed to protect livestock or as retaliation kills for livestock loss.

Visitors to Adelaide Zoo are asked to book online at www.adelaidezoo.com.au/tickets