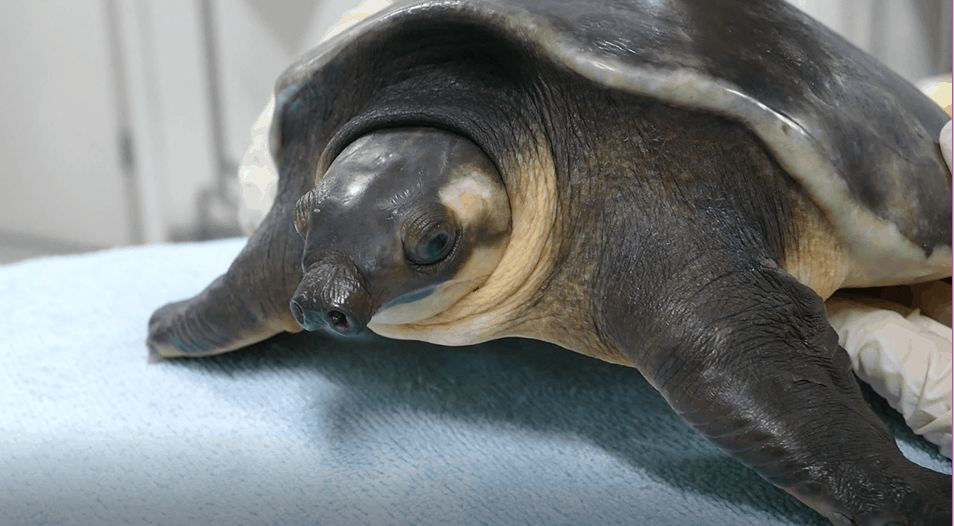 There are two new reptiles in town and everyone ‘nose’ this species is turtle-y awesome!

This interesting freshwater species gets its name thanks to its unique appearance – namely, it’s fleshy, pig-like snout!

The pair have been spending the past weeks behind the scenes in quarantine. But after a final health check in the Animal Health Centre, they are now ready to make their public debut!

“Not many people know about Pig-nosed Turtles so it’s wonderful to have some here at Adelaide Zoo to help raise awareness for the species,” Chad said.

“They have an incredibly interesting appearance with a long squishy nose and two large nostrils – they look quite different to other turtles!

“The iconic nose acts like a snorkel and helps them to breathe air while remaining underwater, they also have an excellent sense of smell and use the snout to source food.

“Being a soft shelled turtle, their shell feels like a wet suit. They are so well adapted for a life in the water; they are the only freshwater turtle in the world to have large paddles similar to a sea turtle”

In the wild, Pig-nosed Turtles are found in northern Australia and southern New Guinea.

They thrive in warm water and typically eat a diet of worms, crustaceans and small fish, as well as fruits and leaves from plants growing along river banks.

Sadly, this special species is considered endangered due to habitat degradation from agriculture, pollution from mining, changes in water quality and fragmentation of rivers.

Wild populations are also declining due to adults and their eggs being hunted for food.

As a conservation charity, Zoos South Australia works to connect people with nature and save species from extinction.

These two Pig-nosed Turtles will act as ambassador animals and raise awareness for the plight of their cousins in the wild.

Visitors will be able to catch a glimpse of this new species in the Reptile House at Adelaide Zoo.