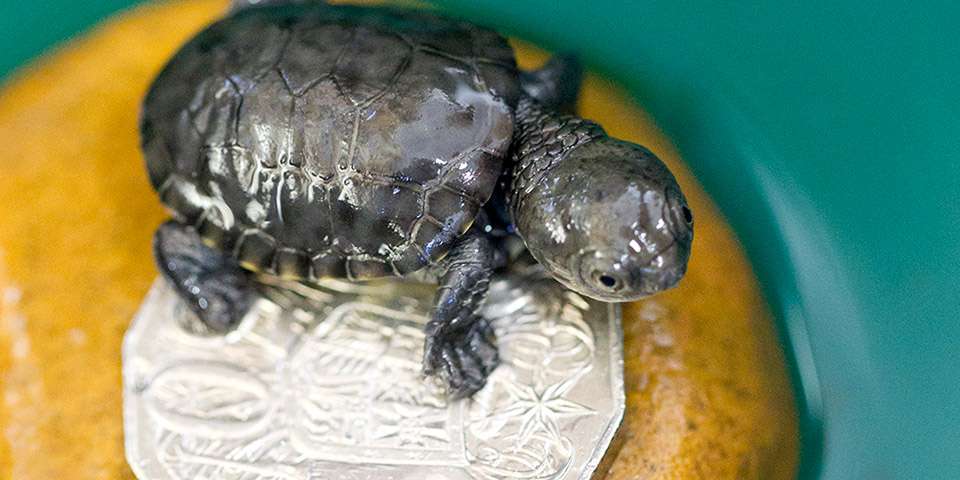 Adelaide Zoo is home to Australia’s most endangered reptile, the Western Swamp Tortoise. Since 2003 Adelaide Zoo, in partnership with Perth Zoo, has been a part of a specialised breeding program to ensure the long-term survival of the species. After the tortoises mate and lay their eggs, zoo keepers carefully dig them up and artificially incubate them to increase successful hatching rates.

The zoo is proud to have successfully bred eight tortoises and continues to house a small population of adult tortoises that form an important part of the regional breeding program.

Adelaide Zoo is the only zoo outside of Western Australia to be given this unique opportunity to house and breed these incredible little tortoises. Our Western Swamp Tortoises are currently off exhibit, living behind-the-scenes in our Reptile House.

The Western Swamp Tortoise is a small tortoise found in a narrow corridor of the Swan Coastal Plain in Western Australia. It’s believed they once inhabited the clay soil areas of the Swan Valley north of Perth until it was developed for agriculture after the arrival of European settlers in 1829.

Western Swamp Tortoises are unique in that they hibernate during summer and not winter like many other tortoises, which must be replicated to successfully breed the species within zoos.

For more than 100 years it was thought the Western Swamp Tortoise had gone extinct until it was rediscovered in 1953. In the 1980s it was estimated that there were less than 30 tortoises left in the wild with the wild population fluctuating between 40 to 120 individuals by 2001. Habitat loss and predation from introduced species such as foxes, cats, dogs and pigs has severely threatened the wild population.

A successful breeding and recovery program lead by Perth Zoo has seen wild numbers increase to nearly 200 individuals over recent years. Tortoises bred at Adelaide Zoo are likely to be released back into the wild when the reach maturity.

Love tortoises? Join our clutch and ensure these tiny tortoises stay a splash ahead of extinction! There are many ways you can help support these endangered creatures!