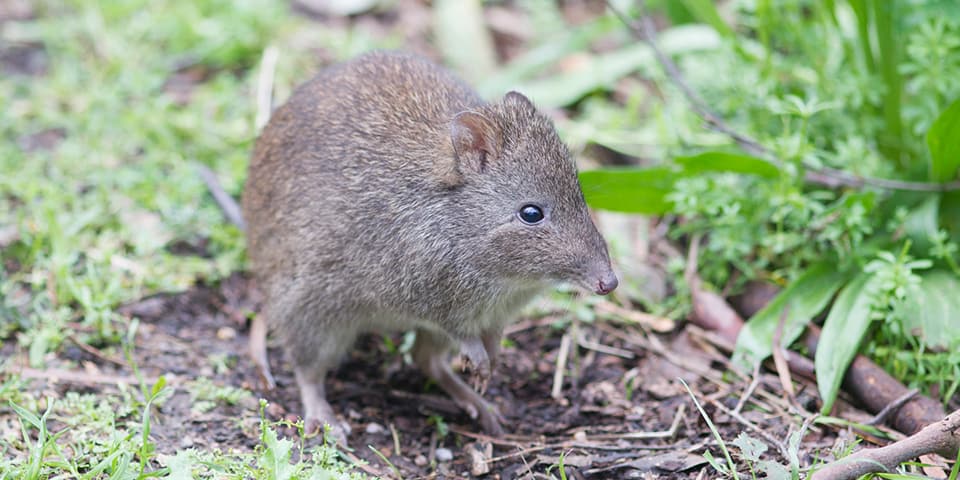 Adelaide Zoo is home to three adorable Long-nose Potoroos. Their names are Quondong, Nancy and Tonya.

These busy little critters are very friendly and spend their days scurrying and hopping around. Their favourite treats are peanuts and seeds! Some people think these animals look like rats but they are actually in the kangaroo family!

The Long-nosed Potoroo might look a bit like a rat, but it’s actually a small marsupial! It hops around just like a kangaroo and carries its young in a pouch.

Found in south-eastern Australia and Tasmania, they’re rarely seen in the wild and are given away by runways left in the undergrowth, and diggings left behind when feeding on roots and fungi. The Long-nosed Potoroo prefers forested areas with dense undergrowth but can also be found in coastal heaths. They’re generally solitary, are nocturnal and hop with their front feet close to their chest like a kangaroo. They prefer to eat fungi, but also enjoy roots, fruit, flowers, seeds and insects.

This tiny critter has the longest gestation period of any known marsupial at 38 days, and once the females gives birth it carries the joeys in its pouch for about four months.

Feral animals like foxes and cats, habitat loss and bushfires are all a threat to the Long-nose Potoroo.

Love potoroos? Join our family and ensure Australian natives like the Long-nosed Potoroo stay a hop ahead of extinction! There are many ways you can help support these mini marsupials!