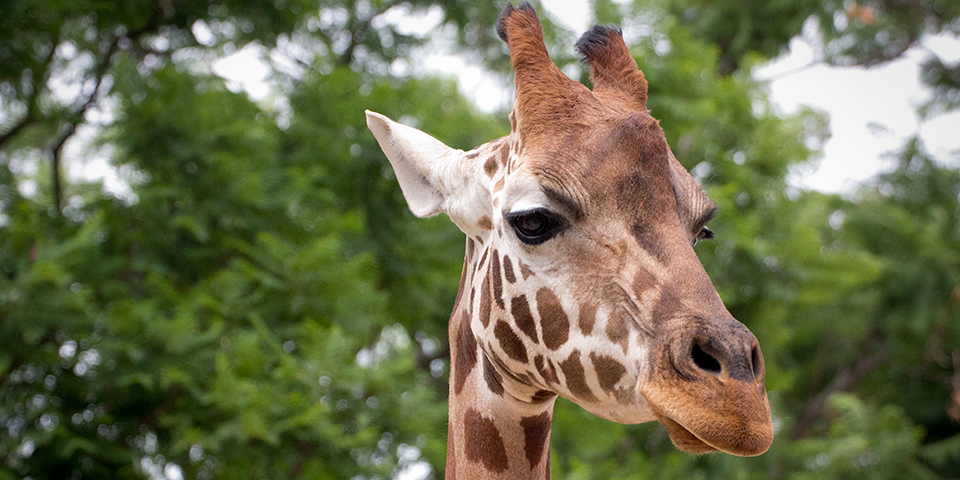 Kimya (quiet one in Swahili) was born on 11 August 2004 at Monarto Safari Park, arriving at Adelaide Zoo in April 2006. Kimya, like her name suggests, is a little shy, set in her ways and enjoys her daily routine. She loves munching on rubber and fig branches and enjoy licking carrot ice blocks on hot days. She enjoys the challenges of training and is very clever, always trying her best when her keepers try to get her to do something new.

Sharing the home with Kimya is Nolean, born 21 October 2019, who arrived from Monarto Safari Park in June 2020 after being hand-raised by dedicated keepers and veterinary staff. At times Nolean required round the clock care, but she soon picked up health before her move to join Kimya at Adelaide Zoo. Nolean is playful, cheeky, and very curious – much like your typical toddler!

Adelaide’s newest little giraffe Azizi joined the herd in January 2021 after being moved to Adelaide Zoo for hand-raising. The adorable male calf is growing quickly and can often be seen bonding with Kimya or zooming around the yard with Nolean.

The giraffe is found in the arid and dry savannah regions of Africa south of the Sahara Desert wherever trees occur.

Giraffes form big, loose nomadic herds that wander the plains, feeding on vegetation as they go. They’re predominantly browsing animals, meaning they tend to eat leaves and bark off trees as the main part of their diet. This feeding pattern has allowed the giraffe to develop two very famous evolutionary traits – a very long neck, and a very long, prehensile tongue that can extend up to 45cm! Both of these physical features allow giraffes to reach vegetation that is difficult to get to, giving it an advantage over other animals.

Giraffes are extremely picky eaters, favouring acacia trees, although they feed for up to 20 hours a day and consume approximately 30kg of foliage daily. A six-foot tall calf grows rapidly, as much as 2.5cm a day, and by six months old is fairly independent of its mother.

The giraffe has one of the shortest sleep requirements of any mammal, averaging two hours daily. Individual giraffes have a unique pattern on their coat, just like fingerprints are unique to each human.

It is estimated there are approximately 80,000 giraffe roaming the savannahs of Africa. This number is declining as their habitats shrinks due to human population growth and an increase in agricultural activity, expanding settlements and road construction. The giraffe’s main food source, acacia trees, is also on the decline.

Love giraffes? Join our herd and ensure giraffes stay a stride ahead of extinction! There are many ways you can help support these gentle giants.