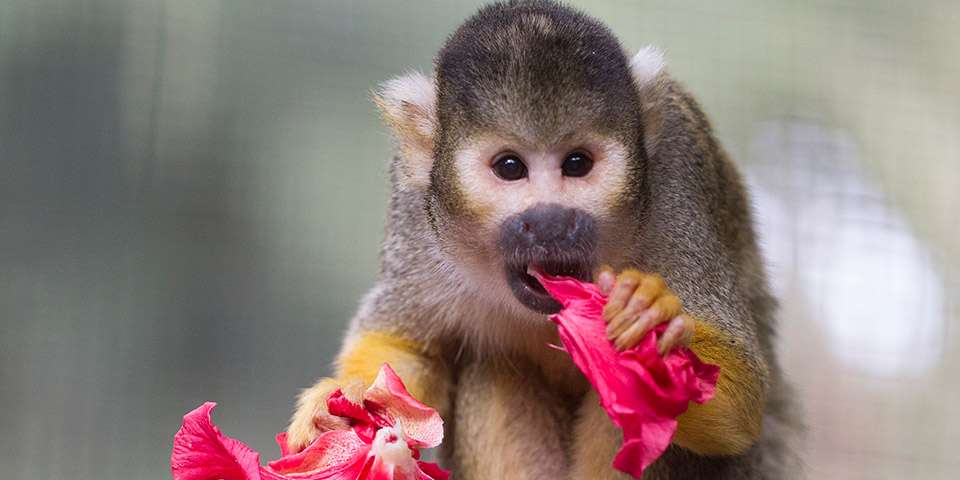 Chica, our resident female, was born on 1 January 2003 at Gorge Wildlife Park arriving at Adelaide Zoo in 2004.Her companion Aztec was born at Taronga Zoo in 2015 and likes to follow Chica around their enclosure. Insects are by far the duos favourite treat and can be seen foraging throughout their exhibit for the creepy crawlies.

The Bolivian Squirrel Monkey is a diurnal monkey that lives in the tropical forests of Central and South America, living in groups of 40–50 animals but these groups have been known to reach 200 or more.

Females tend to look after each other’s offspring with an infant spending 30% of its time in the care of another mother. Proportionally, the Squirrel Bolivian Monkey has the largest brain of all primates with a brain mass to body mass ratio of 1:17.

The Bolivian Squirrel Monkey, like many rainforest animals, is primarily threatened by deforestation, and the species tends to be captured extensively for the pet trade and for medical research.

Due to COVID-19 restrictions, Squirrel Monkey Encounter is unavailable until further notice. If you would like to be the...

Love Bolivian Squirrel Monkeys? Join our troop and ensure Squirrel Monkeys stay a leap ahead of extinction! There are many ways you can help support these adorable animals!