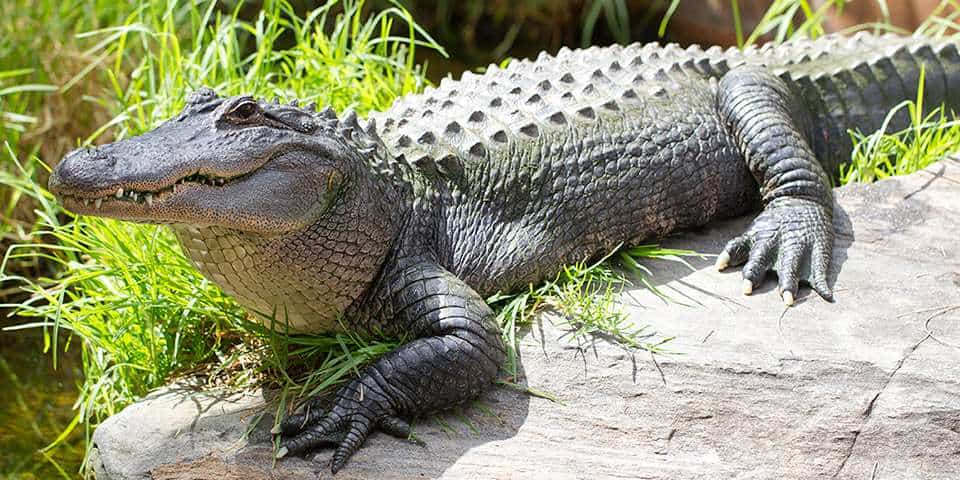 Adelaide Zoo is home to a male and female American Alligator. The pair arrived in 1989 from the Australian Reptile Park in Gosford, New South Wales. The male is larger than the female and she can become very protective of her territory around the time she build nests and lays eggs. Over the years the pair has produced eggs, usually every second year, some of which were then artificially incubated. Once hatched the young were displayed until being sent to other institutions. The pair enjoys a variety of meat but are not fed during the colder months of the year.

The American Alligator is only found in south-eastern USA. They live in freshwater but sometimes venture into saline waterways.

An adult male alligator is 4-5m long, while a female averages 3m. Their tail makes up around half their body length and is used for propulsion through the water. They also use it as a defence weapon when feeling threatened.

Although slow moving on land in comparison to when they are in the water, they can make very fast lunges over a short distance.

An adult alligator will find any potential prey in the water or taking a drink at the riverbanks. They will eat mammals, snakes, fish, birds and have been known to take down big prey such as bears and panthers.

Baby alligators will eat insects, spiders, larvae. As they get bigger, they move onto eating bigger things such as fish, frogs, molluscs and also small mammals like rats and mice.

Inside their stomach they have gastroliths, which are like stones that help to grind up their food. Since they swallow their food whole, these gastroliths aid with their digestion.

There are a few notable differences between alligators and crocodiles:

Love alligators? Join our clutch – there are many ways you can help support these ancient creatures.