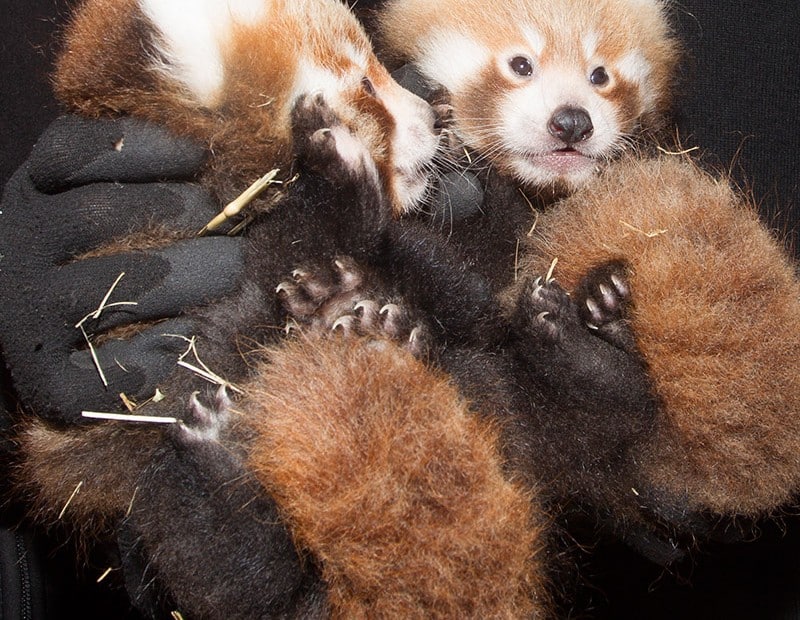 On the morning of Wednesday 28 January, Adelaide Zoo Panda Keepers made a delightful, yet surprising, discovery during a routine clean of the Red Panda night quarters – two tiny Red Panda cubs!

Zoo keepers had ruled out the possibility that the zoo’s eight year old female Red Panda was pregnant in December after the yearly birthing season passed without the arrival of cubs.

Since the discovery, the two nine week old cubs have spent most of their time in a private den snoozing, like most newborns do, while tended to by their mum, Imandari.

Adelaide Zoo Panda Keeper, Constance Girardi say as Imandari’s previous litter of cubs were still living with her, which should inhibit pregnancy, the discovery of cubs came as a great surprise.

“While we had noticed a few behaviours that could indicate pregnancy early on, these behaviours soon subsided and when the birthing season (usually around December) passed, we assumed she was not pregnant,” Constance said.

“You can imagine our surprise when we noticed some extra bedding in the nesting box, and upon discovery, uncovered two very tiny, very cute red fluff balls!

“Red Panda cubs are born quite underdeveloped, so it was important that we followed a hands-off approach and allow time for them to grow and develop a bond with their mum.

“Red Pandas are known for their slow rates of reproduction and high infant mortality rates, so to have two litters of cubs born within 13 months is a fantastic result and a testament to Imandari’s stellar mothering skills.”

As the pair grows, they are expected to become more adventurous and confident with their surroundings and start exploring their habitat so that visitors can hope to catch a glimpse.

Despite their name, Red Pandas are more closely related to racoons than to their black and white counterparts. Native to the eastern Himalayas and south-western China, Red Pandas spend most of their time in trees eating bamboo and a variety of fruits, leaves and eggs.

Red Pandas are classified as vulnerable by the International Union for Conservation of Nature as it is estimated there are fewer than 10,000 left in the wild. The major threats facing Red Pandas in the wild is habitat loss and fragmentation and poaching.