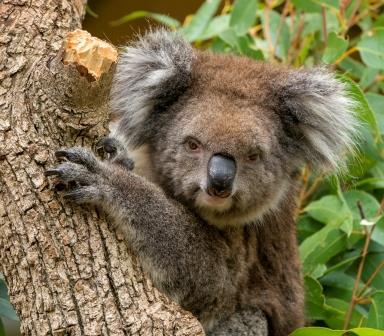 Adelaide Zoo will today welcome a visit from His Royal Highness The Prince Edward, Earl of Wessex KG GCVO as part of his royal visit to Adelaide to promote and raise funds for The Duke of Edinburgh’s International Award in Australia.

During his visit, HRH The Earl of Wessex will officially unveil and name Adelaide Zoo’s newest arrivals, two female Koalas.

Zoos SA’s Chief Executive Elaine Bensted said the royal visit was a wonderful opportunity to celebrate one of Australia’s most loved species.

“We are delighted to have His Royal Highness visit Adelaide Zoo and officially welcome two new Koalas to our wild family,” Elaine said.

“We know our new Koalas – named Sophie and Louise after his Highness’ wife and daughter – will become powerful ambassadors for the many species that inhabit the Australian bush.”

Abundant in the Adelaide Hills but declared a vulnerable species nationally, Koalas face a number of threats in the wild.

“Koalas in some regions face increasing threats from urban expansion, disease, habitat loss, vehicle strike, and predation by dogs, and from their susceptibility to drought and climate change,” Elaine said.

“As a conservation charity, we work closely with the South Australian Department of Environment and Water and other key partners to help conserve and manage Koala populations across our state.”

HRH The Earl of Wessex said he was thrilled to visit Adelaide Zoo and to officially unveil Sophie and Louise to the public.

“The Koala is one of the world’s most iconic animal species and my wife and daughter were absolutely thrilled when I told them that two Koalas in Australia would be named in their honour,” His Royal Highness said.

“Conservation organisations like Adelaide Zoo undertake vital work to conserve species from extinction; it is so important that we all do more to preserve the planet’s wildlife.”

Adelaide Zoo will soon launch a koala brief animal encounter, giving the public the opportunity to get up close to Australia’s much loved marsupial.