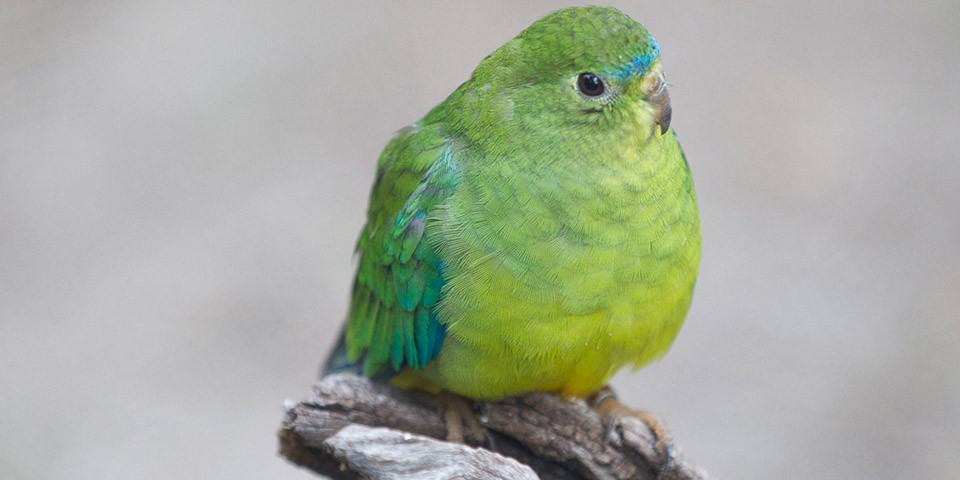 Adelaide Zoo’s latest approach to Orange-bellied Parrot breeding shows we’re willing to stop at nothing to secure a future for this critically endangered bird.

In a world first for the species, this breeding season we will be trialing an artificial light technique at Adelaide Zoo to kick start the Orange-bellied Parrot breeding season earlier this year and give our birds a better chance at successfully raising more chicks.

With less than 20 Orange-bellied Parrots returning to the mainland last breeding season, Adelaide Zoo is playing a key role in the recovery of this species through our vital breeding program.

We are one of five organisations involved in a national collaborative captive breeding program to help ensure the species does not become extinct in the wild.

Over the last two years, we’re proud to have fledged more than 15 chicks, an important contribution to the insurance population safeguarding this parrot from extinction.

“One of the challenges of breeding Orange-bellied Parrots is they breed in late Spring, meaning when chicks hatch, temperatures in Adelaide can be in the high thirties and low forties, which is significantly warmer than they would be used to on the west coast of Tasmania,” Dr Ainsley said.

“To combat this, last year we installed an air-conditioning system into our breeding facility.

“This year, we’re ramping up our efforts even further, installing an artificial light system that will allow us to alter day length – one of the main factors believed to influence breeding periods in birds.

“Using a device known as an astronomical timer, we will alter sunrise and sunset times to fast-forward their breeding response by about two months.

“This, along with changing their diet to what they normally receive during breeding season, will hopefully give us a head start on this year’s breeding season and see any hatched chicks further advanced and more able to cope before warmer conditions arrive.

“It may also provide an opportunity to double clutch this season.”

Native to Australia, the small migratory bird spends the summer breeding in south-west Tasmania and migrates to Victoria and South Australia for the winter.

It is one of only three known migratory parrot species.

With only three females returning to Tasmania to breed this year, Adelaide Zoo’s program has never been more important to support the remnant population.

As a conservation charity, saving species from extinction is at the core of what we do.

Across Adelaide and Monarto Zoos, we house many species which are under threat in the wild.

Almost 70 per cent of the animals that call Monarto Zoo home and 40 per cent at Adelaide Zoo are threatened with extinction.

These animals have a critical role to play as insurance populations to safeguard the long-term survival of these important species and have the potential, if ever needed, to help re-establish wild populations in their natural habitats.

Our work with many species including the amazing Orange-bellied Parrots will hopefully safeguard these species and ensure their long term survival.