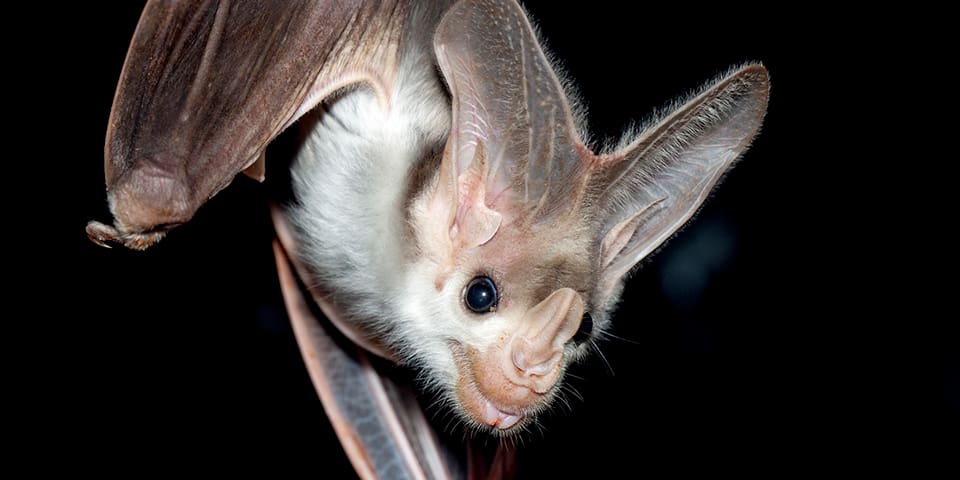 Although Ghost Bats are generally shy by nature, our group is quite social and like to roost together and enjoy a bit of chit-chat, particularly as breeding season approaches. Our males can be quite boisterous at times and even like to play chasey! They love to snack on creepy-crawlies like crickets, cockroaches and mealworms.

Like most bats, our impressive Ghost Bat colony loves the dark, so they have the perfect home in our Nocturnal House. The bats range in age from less than a year old to around 12 years old, and here at Adelaide Zoo we’ve had a lot of success breeding these little guys.

The Ghost Bat is a micro-bat and is fittingly named given its unusually pale colouration and translucent wings that give it a ghostly appearance as it flies through the night sky. Their soft fur is usually white or pale grey and their wing span can reach up to 60cm wide.

The Ghost Bat is also known as the false vampire bat and is Australia’s largest carnivorous bat. Small mammals like mice, as well as insects, lizards, frogs, small birds and even other bats are all on the menu for this species! They leave their roosts at sunset to hunt, using both sight and sound. Their large ears are nearly half the length of their head and are used to find prey through echolocation, where they emit a high-pitched sound and listen to the echo to locate their next meal.

Ghost Bats live in a wide range of habitats including rainforests, arid areas, tropical savannah, woodlands and mangroves and are commonly found across the Northern Territory, Queensland and Western Australia in relatively isolated populations. They like to roost in quiet caves or mineshafts.

Ghost Bat populations in the wild are at risk from habitat destruction from mining and tourism as well as competition for prey from feral animals like foxes and cats.

Love bats? Join our colony and ensure bats stay a beat ahead of extinction! There are many ways you can help support these astonishing animals.